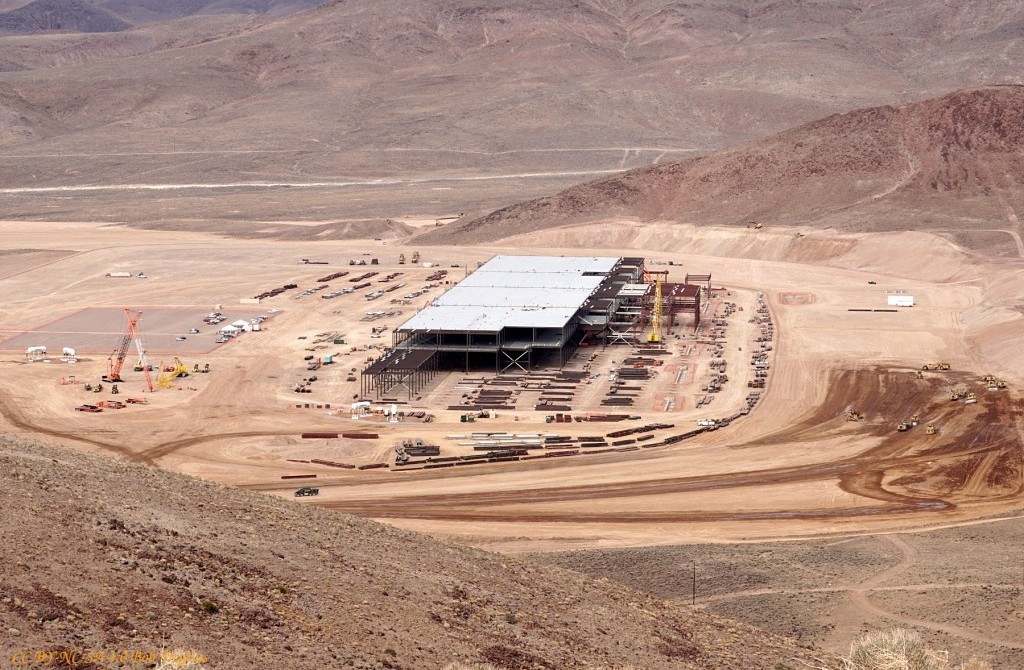 The full picture of Tesla Gigafactory in Sparks, Nevada.

(Thomas Mitchell) – Writers at the Seeking Alpha website are taking a more jaundiced view of the much vaunted Tesla Motors and plans for a gigafactory near Sparks that was given $1.3 billion in tax breaks by the state.

Paulo Santos opines that the gigafactory will be much smaller than the announced 10 million square feet, perhaps 80 percent smaller. He quotes Tesla head honcho Elon Musk as saying,” But what we have found is, with the Gigafactory, that as we spent more and more time on it, we found we’ve been able to improve the space efficiency of the production and the overall efficiency by more than our initial expectations. So the net result is that we think in the same volume we can do potentially significantly more output.” (Santos’ bold-face.)

Santos also notes that a union told its members in March the project was being cut by 80 percent.

Long/Short Trader has a headline that reads: “The Tesla Bubble is Bursting.”

It notes there are problems with the production of the first orders of the Model X, as well as “exaggerated promises, and profligate spending.”

The writer notes that Tesla has lowered its estimate for the number of cars it will ship for the year from 55,000 to between 50,000 and 55,000. “All of this should come as no surprise to Tesla watchers. Musk tends to promise more than he can deliver and then attempts to make up for shortcoming later on,” the article notes.

Then there is the problem of lower oil prices, as well the fact earnings per share continue to decline and remain negative.

When Musk’s SolarCity was awarded $1.2 million in taxpayer handouts to open an office in Nevada for rooftop solar installations, then-Secretary of State Ross Miller fawned, “You had me at Elon Musk,” while voting to award the handout.