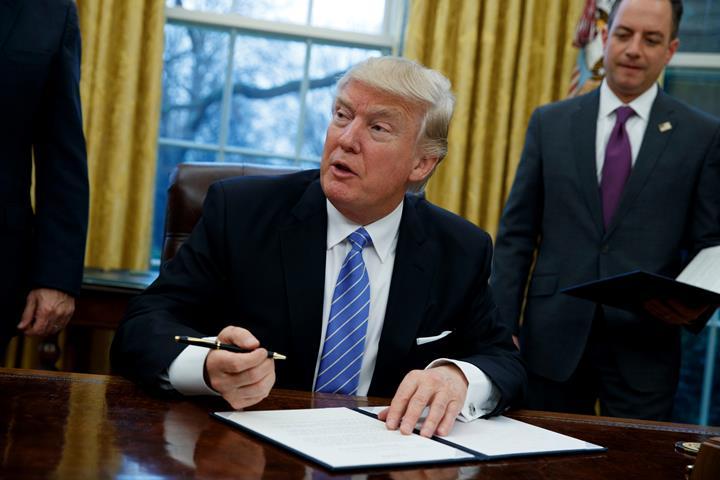 (Thomas Mitchell, 4TH ST8) – President Trump signed an executive order, Tuesday, telling the EPA and the Army Corps of Engineers to review the so-called waters of the United States (WOTUS) rule created under the Obama administration, which attempted to usurp dominion over every stream, ditch, wetland or muddy hoof print that might eventually spill a few drops of water into any rivulet that might occasionally be navigable with an inner tube.

“We’re going to free up our country and it’s going to be done in a very environmental and positive environmental way, I will tell you that,” Trump said. “[We will] create millions of jobs, so many jobs are delayed for so many years that it’s unfair to everybody.”

Trump ordered the federal agencies to review a 2006 opinion by the late Justice Antonin Scalia, that reduced the scope of the act by defining “waters of the United States” as only permanent bodies of water and not the occasional result of rainfall.

Nevada was one of 23 states to file suit over the WOTUS rule. The Supreme Court ruled this past summer that property owners had a right to sue in court over permitting decisions. The federal agencies had contended property owners could only go to court once decisions were final, but essentially argued that all permitting decisions are reviewable and potentially reversible and therefore never final.

In December 2010, the Hawkes Co. applied for a permit to mine peat on property in Minnesota. More than a year later the Army Corps denied the application, saying the land contained “water of the United States” because its wetlands had a “significant nexus” to the Red River of the North, located some 120 miles away.

In the opinion of the court, Chief Justice John Roberts pointed out the definition of WOTUS used by the EPA and the Corps includes “land areas occasionally or regularly saturated with water — such as ‘mudflats, sandflats, wetlands, sloughs, prairie potholes, wet meadows, [and] playa lakes’ — the ‘use, degradation or destruction of which could affect interstate or foreign commerce.’ The Corps has applied that definition to assert jurisdiction over ‘270-to-300 million acres of swampy lands in the United States — including half of Alaska and an area the size of California in the lower 48 States.’”

Roberts also noted that a specialized individual permit on average costs $271,596 and 788 days to complete. He said the permitting process can be “arduous, expensive, and long.” He left out futile since the process never ends.

Nevada Attorney General Adam Laxalt applauded the judgment, “This unanimous U.S. Supreme Court decision vindicates our position that the Obama administration has continually attempted to avoid the rule of law and judicial review of its unlawful actions. The Obama administration seems determined to move as far and as fast as possible to unilaterally change our constitutional system and our congressional laws. … Fortunately, in this case, our checks and balances have protected Nevadans from truly unprecedented federal overreach.”

N&V StaffSeptember 20, 2021
Read More
Scroll for more
Tap
AB250: Democrat Bill to “Send a Poor Person to the Beach” — NOT a Joke
Center for Competitive Politics Continues to Fight for the First Amendment Speech Rights