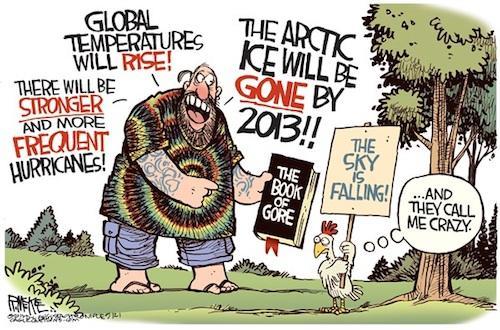 (Thomas Mitchell, 4TH ST8) – What Obama could do with his pen, Trump can undo with his — and has.

On Tuesday Trump signed an order telling the EPA to rewrite Obama’s Clean Power Plan that would have closed down most coal-fired power plants so they could be replaced with windmills and solar panels. Obama had committed to cutting so-called greenhouse gas emissions by 26 percent by 2025, while shrugging off the fact his plan would suck $1 trillion out of the economy and kill 125,000 jobs, as The Wall Street Journal reports today in an editorial.

The WSJ further points out the utter futility of Obama’s senseless and futile gesture, because a year of U.S. emission cuts in 2025 would be canceled out by three weeks of Chinese emissions. Besides, though emissions continue to increase, temperatures globally have remained much the same.

Also in today’s WSJ, Paul Tice, a business prof and energy research analyst, recommends that Trump’s EPA needs to conduct a study that would show whether or not the agency’s 2009 “endangerment finding” that tagged carbon dioxide as a pollutant is indeed valid. He suggested the decision was rushed and based on flawed data. Until that finding is confirmed or more likely refuted, he notes some future liberal president can scratch through Trump’s order.

Tice notes the “breakdown in correlation between the world’s average surface temperatures and atmospheric carbon dioxide levels” has called into “question both the predictive power and input data quality of most global climate models, and further highlights the scientific uncertainty surrounding the basic premise of anthropogenic climate change.”

Throwing money at faulty theories is hardly a wise endeavor.

The WSJ editorial concludes: “As for climate change, President Trump’s order will have the same practical effect on rising temperatures as the Clean Power Plan: none.”