Mitt Romney almost gave us Hillary Clinton…just like how Dean “Never Trump” Heller helped deliver Nevada to her on a silver platter.  I accept that he’s gonna be the next U.S. senator from Utah.  But I wish it was otherwise.  We have enough problems with moderate Never Trumpers in the Senate already.

Tennessee Sen. Bob “Never Trump” Corker is so damaged with Trump supporters that even if he does a Rubio-like flip-flop and decides to run for re-election he’s quite likely to lose in the primary to Rep. Marsha Blackburn and, if he somehow pulls it out, will almost certainly lose in the general election to the Democrat.  Too many Trump supporters simply won’t vote for him under any circumstance.

Hearing there may be yet another late entrant into the CD3 race; a Trump supporter of unquestioned loyalty and dedication who was up to his ears in making America great again in Nevada in 2016.  (Countdown to new Victoria Seaman meltdown/blow-up begins in 5, 4, 3…)

The field has also shifted in the CD4 race.  Former Clark County Republican Party Chairman Dave Gibbs is hopping into the race vs. former Rep. Cresent Hardy for the GOP nomination.  Not sure of Gibbs’ fundraising ability for this race, but Hardy will be severely hamstrung at the ballot box by his Heller-like Never Trump position in 2016.

Also hearing that conservative GOP’er Jeff Miller, who earlier announced he was going to run in this race, has opted to drop out and give Gibbs a straight one-on-one shot vs. Hardy for the Republican nomination.  Helpful for the Gibber.

Also, go ahead and plan on North Las Vegas Mayor John Lee jumping into the Democrat primary in CD4 vs. former Rep. Stevie Horsford and a fistful of lesser players.

Rumor mill has it that former State Assemblyman Brent Jones is mulling a challenge to Senate Minority Leader Michael Roberson in the GOP primary for lieutenant governor’s race.  He’d be joining Scott LaFata of Vegas and Eugene Hoover of Reno in an effort to derail GOP gubernatorial nominee Adam Laxalt’s choice for the #2 state guv position.

Tax-hiking RINO former Assemblyman Stevie Silberkraus has announced a comeback bid by running for the seat he lost last time out after voting for the largest tax hike in Nevada history.  Absent an unambiguous apology for that vote and signing the Taxpayer Protection Pledge this time around, there’s no reason for conservatives to support this political resurrection effort.

Laborer’s Local 872 is all-in for Marco and all-out for Tick.  The union is also surprisingly backing a number of Republican candidates this cycle over the issue of “putting people to work.”  I think Sen. Segerblom may have a much more difficult time in this race than most otherwise would have expected.

I received a “request” from the United States Department of Commerce to spend what they estimate will be nine minutes of my time to complete a 2017 Economic Census survey.  The “request” includes this warning at the end in bold, all-cap letters:  YOUR RESPONSE IS REQUIRED BY LAW.

Somebody doesn’t understand the definition of “request.”

OK, so I’ve wanted to go hang out at the Dueling Piano Bar at Harrah’s for a long time.  Going this Thursday with Gia and another couple.  Thought maybe I’d just get a room there for the night instead of risking driving home “under the influence.”  And it seemed like an even better idea when I found on Expedia that a room was only $35.

This is all part of the Las Vegas Convention Center effort to re-make Vegas into a convention town instead of a tourist town because convention-goers are usually spending somebody else’s money – their employers’ – rather than their own.

As Ted Newkirk of AccessVegas.com noted in an op-ed in Sunday’s Las Vegas Review-Journal, this nickel-and-dime fleecing of tourists in preference to expense account-wielding conventioneers goes a long way to explain an almost 2 percent drop in non-conventioneer visitors last year.

Sounds like Big Gaming’s corporate bean counters are intent on killing the goose that laid the Golden Nugget’s eggs.

I understand that some of my conservative friends and allies are unhappy with my opposition to Victoria Seaman’s campaign for Nevada’s 3rd congressional district seat.  And that’s OK.  I’ve been through this sort of thing before – like when I warned that now-Assemblyman Chris Edwards was a weasel and former Clark County GOP chairman Dave McKeon was a louse.

The thing is, I’ve seen a side of Seaman that she hides from most people when she’s out in public.  And I understand how she’s been able to fool a lot a people.  I’m just not one of them.

In my experience I’ve come to the conclusion that she’s a phony with an insatiable appetite to “be somebody.”  She’s a “convenient conservative” with an explosive temper, a habit of spewing falsehoods, a high degree of paranoia, and skin so thin you can see though it (yuck).

She’s rash and easily “triggered” – as demonstrated last weekend when I “punked” her at a political event we both attended.  Here’s what happened…

I was standing outside the campaign headquarters of Adam Laxalt for its grand opening.  A number of people came out and told me that Victoria was inside telling people I was being paid by one of her opponents, State Sen. Scott Hammond, to expose her actual voting record from the 2015 legislative session in which she served.

The claim is false.  Which is par for the Seaman course.  She invents paranoid campaign conspiracies in her own mind and then makes totally false allegations with absolutely no proof whatsoever.  But in light of the reports I heard, I decided to have some fun at her expense and stoke the flames.

Sen. Hammond was there, also.  He came outside and we chatted briefly about his race and the school choice issue – an issue near and dear to his heart.  I then asked if we could get a “selfie” together for me to post on Twitter to see if it would set Queen Victoria off into a “See, I told you!” conspiracy meltdown.

It was like shooting fish-sticks in the freezer. She took the bait – hook, line and sinker! 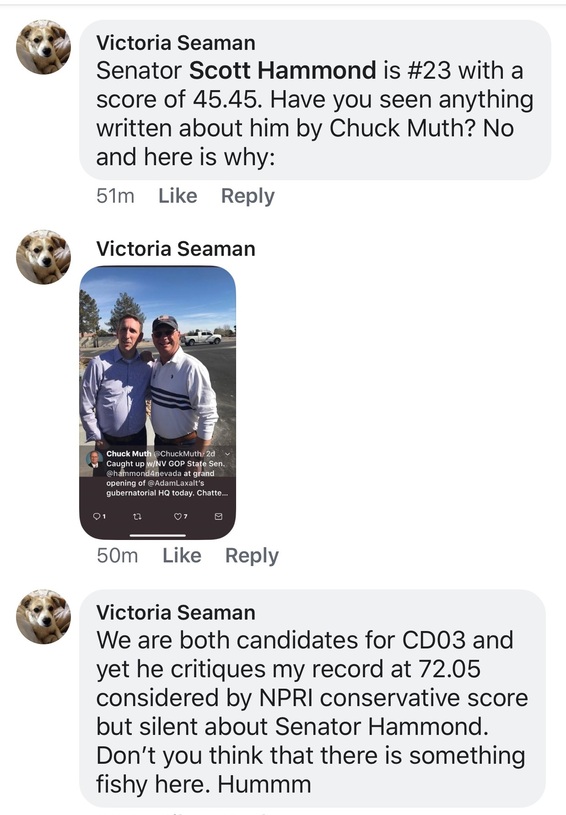 In case you can’t see the Facebook post image she sent out, she claims I haven’t written anything negative about Sen. Hammond because we’re buddy-buddies, as “proved” by nothing more than the fact that I took a photo with Sen. Hammond for no reason other than to see if Queen Victoria would make a conspiratorial fool of herself.

She concluded with, “Don’t you think that there’s something fishy here.  Hummm.”

Paranoia will destroy ya, hon!