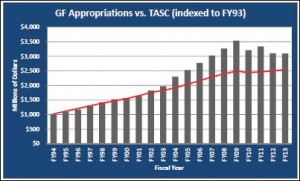 (Victor Joecks/NPRI) – After the 2012 election, expect many liberals to start asserting that Nevada needs to “reform” its tax code.

Two things to note here. First, by “reform” those liberals, as they showed last session, mean increase. Going behind the rhetoric, the above sentence actually means, “After the 2012 election, expect many liberals to start asserting that Nevada needs to increase taxes by creating a new type of tax.”

Second, most liberals will pretend they don’t want to increase taxes in order to try and get elected. Even Sen. Steven Horsford, when he was running for state senate in 2008 and a few months before he voted for the largest tax hike in Nevada’s history, said, “I won’t support tax increases — not when the private sector is losing revenue and losing jobs.”
So after not being honest with voters, here’s the argument liberals will make. If Nevada had another type of tax (like a margins tax) — a third leg on Nevada’s tax “stool” — Nevada’s budget problems would be solved.

If that’s the case, California — with a personal income tax, corporate income tax, and sales tax — should be the model of fiscal stability. Oh, wait. California is currently running out of money.

California is going broke. Again. The state controller has estimated that the state will run out of money sometime this month. California will need to find $3 billion in cuts or revenues to keep the state in the black through the rest of this fiscal year.

And next year looks even worse. California’s Legislative Analyst Office projects that, even with billions in one-time revenues from Facebook’s impending IPO, Gov. Jerry Brown’s budget will run a $6.5 billion deficit.

Just more evidence that controlling spending is a much, much bigger factor in a state’s fiscal condition than the types of taxes a state has. That’s certainly the case in Nevada, where, despite all the overblown complaints about spending reductions last session, the state is still spending substantially above the inflation-adjusted, per-capita spending level Nevada had in 1994.

Now, if there are lawmakers who are interested in revenue-neutral tax reform, NPRI has put forward an excellent proposal, called One Sound State. But NPRI’s tax reform proposal is a proposal for tax reform, not increasing taxes under the guise of reform.

This proposal will show if left-leaning politicians are interested in reform or in just spending more of your money.