Motley: DC Economics ‘Experts’: Too Much ‘DC’ – Not Enough ‘Economics’ 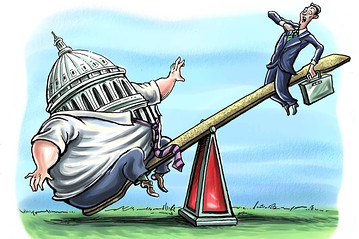 (Seton Motley) – Steve Forbes, Larry Kudlow, Arthur B. Laffer and Stephen Moore are four big name Washington, D.C. free market economic “experts.”  They have for decades been ensconced inside the Beltway – doling out their brands of reform.

But as we have seen from nigh anyone who enters the belly of the DC Beast – people grow comfortable, and start to stray from the less government ideas that brought them there.

Rather than rock the boat – they’d prefer to remain comfortably aboard.

Art Laffer was the first to deviate from the conservative norm.  He has for years been a leading champion of the Marketplace Fairness Act.  An absolutely awful federal law that would empower state governments to collect sales and use taxes – from companies not located in those states.

Get that?  This is the quintessential example of taxation without representation.

California has spent the last several decades taxing just about every business in their state – out of their state.  Laffer wants to empower California to tax businesses – no matter where they moved to escape California taxing them.  And millions of other American businesses – that never even set foot there.

But one of DC’s biggest lobbyists – is The Retailers.  Walmart and the like – whose brick-and-mortar stores are stuck in awful places like California, paying California’s awful taxes.

But rather than lobby those awful states for better tax policy – The Retailers lobbied DC for worse.  And Laffer was – and remains – happy to oblige.

Which brings us to the Border Adjustment Tax (BAT).  Which is a key component of the House Republican plan for sweeping tax reform.

Under said plan, gone entirely will be the death tax and the Alternative Minimum Tax (AMT).  The corporate rate will be cut nearly in half – from 39.4% to 20%.

Which is, you know, when they actually spend the money.  Gone will be the complicated, various-years-depending-upon-the-item-purchased degraded, partial expensing.  Freeing up much needed coin and time for these businesses to, you know, do business.

And perhaps best and most important of all?  The House tax reform plan gets rid of the decades-long incentive to make stuff – anywhere on the planet but in the United States.  This is the BAT.  It taxes imports (at the new, halved 20% rate) – rather than exports.

Which is a phenomenal idea – if one of your goals is to incept an ongoing, rolling avalanche of job-creators rushing back to the U.S. to manufacture.

But then – there are The Retailers.  Whose goal is to protect the massive tax breaks they enjoy for manufacturing anywhere but here.

In yesterday’s New York Times (really, the New York Times?), Forbes, Kudlow, Laffer and Moore all co-signed an editorial – in which they oppose the BAT:

“Republicans should abandon the so-called border-adjustable tax. A border tax is a poison pill for the tax plan: It divides the very business groups that the party needs to rally behind tax reform. Retailers like Walmart will never go along.”

And there again is that magic word – Walmart.  The lead dog in The Retailers lobby pack.

But seriously, how gone-native DC-centric is this thinking?

The BAT is a “poison pill” – only if DC thinks about DC, and not We the People.

And here I have a question specifically for Moore.  In January, you wrote this:

“A big fight is looming in Washington over how to reform the tax system, and one of the biggest bones of contention is whether America should adopt a so-called ‘border-adjustable’ tax.  The following example helps explain why changing to a system that taxes our imports brought into the country rather than our exports that are made here at home makes economic sense.…”

Get that? Just three short months ago – Moore was totally in favor of the BAT. At which point – he was exactly correct. Flipping the massive tax incentive to manufacture here rather than everywhere else on the planet – “makes economic sense.” Lots of it. Eminently so.

So what happened, Steve?  Did we just witness yet another DC-centric transmogrification – that we have all come to know and loathe in so many others?

What we do know – is The DC Economics Four are, now, all woefully wrong on the BAT.

Why they are – is open to interpretation.