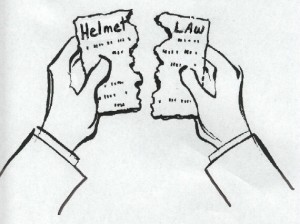 (Sen. Elizabeth Halseth) – With so many supporters of SB177 in Carson City and Las Vegas last week, those who wanted to testify in support of the bill were limited to five minutes and still not everyone was able to voice their opinion. In fact, there were so many exhibits that were given to committee members in support of the bill that very few are even posted online.

The Las Vegas Review Journal stated “a large contingent of police” came to testify in opposition of the bill, however, for the record less than a handful of active police officers attended the hearing and there were no insurance companies in attendance.

Could that be because we couldn’t find any evidence of insurance rates increasing in any of the states that have an optional helmet law? Perhaps its because in the exhibits we were given that motorcycle fatalities actually decreased in Florida after the repeal of their helmet law. One motorcyclist said his hearing and vision are partially impaired because of a helmet, a statement echoed by several other riders.

SB177 eliminates the requirement of wearing protective headgear for drivers of motorcycles who are 21 years of age or older, have possessed a valid motorcycle license for not less than one year and have completed an approved motorcycle safety course.

This bill not only restores the liberty of riders right to choose it would also help create business, jobs, raise tourism in Nevada, increase motorcycle sales and registration. All of this will certainly be a boost for our economy.

If the chairwoman of the Senate Transportation committee allows this bill to come to a vote it certainly appears to have the support to make it out of committee and out of the Senate. It’s not only a bipartisan bill but has primary and co-sponsors from each house.