Yesterday afternoon, I finally got to talk with singer/songwriter Joy Villa – whose stunning pro-Trump “Make America Great Again” dress was the talk of this year’s Grammys – and oh, what a joy it was!  Her enthusiasm and sense of humor are infectious.

Joy’s part Native American on her mother’s side, but unlike Sen. Elizabeth Warren, Joy tells me she’s actually done the research and her heritage is real and legitimate.  Had a good laugh over that one.

We also talked a little about the blowback she received over the dress controversy – including someone altering her Wikipedia page and writing that her stage name was “Princess Trump Trash.”  And that will be the subject of her keynote remarks at the 2017 Conservative Leadership Conference this September 15-16 in Las Vegas.

It wasn’t all bad, though…

Breitbart News reports that Joy’s red-carpet appearance resulted in her 2014 album, “I Make the Static,” shooting up the Amazon and iTunes sales charts that week, “overtaking albums from Grammy-nominated artists like Lady Gaga and Beyoncé.”

Oh, and Joy also offered to sing and perform at our Conservative Awards Dinner on Saturday night!

I cannot wait to meet this talented, fun-loving, unafraid, controversial Trump supporter.  In the meantime, you can catch her post-Grammy interview on Fox & Friends by clicking here.

P.S.  “Is It Time to Break Up Google?” is one of the dumbest columns I’ve read recently.  That it was published by the New York Times came as no real surprise.  And I’ve inked a response, complete with my patented “Muthicized” sarcasm, topped off with a healthy and well-deserved dose of ridicule.

You can read it by clicking here

But since those reports came from a news source funded in part by a $100,000 donation from Cloobeck himself, we won’t mention their name despite the E! Doctrine.

According to Barbara Dragon of the Nevada Homeschool Network, this nanny-state bill “lowers the compulsory (school) attendance age from 7 to 6” and “also mandates Kindergarten for 6 year olds enrolling in a public school if they were not enrolled in a public/charter school at age 5, which is punitive to the child!”

“When the Raiders leave, I am going on an NFL moratorium for two years.  You cannot take the Silver and Black, put them in an air-conditioned dome in the desert, make them play on artificial turf within a stone’s throw of the fountains of Caesars Palace, and call them the Raiders.” – Actor Tom Hanks on decision to move the Oakland Raiders professional football team to Las Vegas, San Francisco Chronicle, 4/27/17 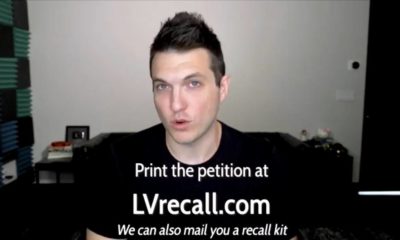