The bias in the media against President Donald Trump is often very subtle, but unmistakable.  For example, consider this blurb yesterday from an article by Julie Bykowicz and Erica Werner of the Associated Press…

Trump didn’t “launch” an attack against Mitch McConnell.  Trump RESPONDED to an attack by McConnell, who blamed Trump for ObamaCare repeal’s failure; saying Trump was new to DC and had unrealistic expectations.

Trump didn’t punch; he counter-punched.  Which he’s known for.  You could look it up.  Yet nowhere in the reporters’ report does it mention that McConnell started the fight.  Go figure.

In the same report, the “reporters” note that some Senate colleagues have come to McConnell’s defense in the spat with the president.  Sen. Todd Young (R-Ind.) went as far as to say without McConnell we wouldn’t have Neal Gorsuch on the Supreme Court.

That’s a laugh.  With a 52-48 majority in the Senate, Republicans could have confirmed the eminently qualified constitutionalist with Forest Gump as Majority Leader.  Get a grip, Todd. 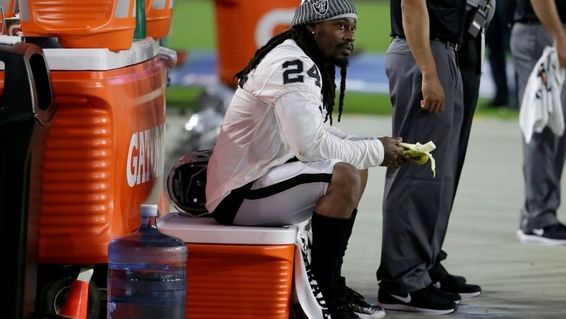 The Oakland Raiders’ running back opted to sit on his arse eating a banana Saturday night as the National Anthem was played before the start of the NFL team’s pre-season game against the Phoenix Cardinals in a protest against alleged racism.

The Colin Kaepernick-wannabe is being victimized to the tune of $4.5 million a year!

Raiders coach Jack del Rio said he told Lynch, “I’m going to respect you as a man. You do your thing.”

Yeah, jerk, “do your thing.”  And I’ll do mine.  Boycott the Raiders as long as you continue boycotting the Star Spangled Banner.

CLC ’17 SPEAKERS IN THE NEWS

“Former presidential candidate Herman Cain (R-Ga.) said Sen. John McCain (R-Ariz.) is ‘the biggest bozo’ on Capitol Hill.  Cain said he respects McCain’s valor in Vietnam, but that his legislative service leaves much to be desired.  ‘I respect him for his military service. But, I do not respect him for stabbing the American people in the back [on ObamaCare repeal],’ Cain said.” – FOX News, 8/11/17

Mr. Cain is scheduled to speak on Saturday morning, September 16, 2017 at the Conservative Leadership Conference in Las Vegas.  For additional information and details on our discounted 2-for-1 Early Bird special, please go to: www.CLC17.org.

“Top Trump donor ponies up to take out Flake:  Robert Mercer, a reclusive hedge fund billionaire who was intimately involved in Trump’s rise and helped to bankroll his 2016 campaign, is contributing $300,000 to a super PAC supporting former state Sen. Kelli Ward, who is challenging Flake in a Republican primary next year. It’s the latest sign that Trump’s political machine is preparing to take on Flake, whose persistent attacks have angered the president.” – POLITICO’s Alex Isenstadt (Is Nevada’s Sen. Dean Heller next on the list?)