Just an FYI, the first run of my new book, “101 Greatest Conservative Quotes of All Time,” has been printed and is in shipment as we speak.  And one of the quotes included is this one from Ben Franklin (page 51)…

“I am for doing good to the poor, but I differ in opinion of the means. I think the best way of doing good to the poor, is not making them easy in poverty, but leading or driving them out of it.  In my youth I travelled much, and I observed in different countries, that the more public provisions were made for the poor, the less they provided for themselves, and of course became poorer.”

That quote came to mind immediately as I read this opening paragraph from a CNBC story yesterday, thoughtfully forwarded to me by reader Bob Fuss…

“The U.S. Department of Agriculture plans to launch a two-year pilot program this summer with seven retailers to allow food stamp recipients the ability to purchase their groceries online.”

It should be noted the President Donald Trump has NOT yet appointed a Secretary of Agriculture.  When he does, let’s hope the new Ag czar kills this boneheaded idea as one of his first acts in office!

P.S.  Speaking of “101 Greatest Conservative Quotes of All Time,” I only ordered 101 initial copies because I want to make sure the design and layout in reality looks exactly the way it looks on my computer screen. 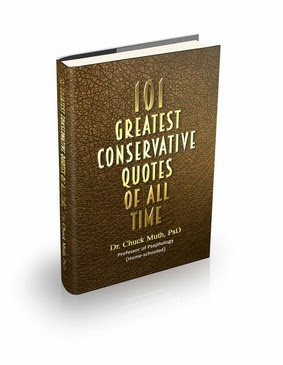 I sent a “galley copy” of the manuscript to my friend and former House SpeakerNewt Gingrich – who has a couple of gems included in the book – for review. And here’s what Newt wrote back: “No one knows conservatism better than Chuck Muth.”

Anyway, a couple dozen of the first-run of the book have already been pre-reserved.  If you’d like one of the remaining AUTOGRAPHED, first-run copies – on a first-come/first served basis – just go to www.CitizenOutreach.org right NOW before they’re gone.

“Why are we supporting these people (the United Nations)?  If you want to spend a fortune of money and keep getting abused every day while you’re doing it, marry a Jewish woman.” – Comedian Jackie Mason