I took a quick 3-day post-election Daddy-Daughter “staycation” at the Lake Las Vegas Hilton with my teen daughter, Kristen, to decompress a little and spend some time with her after being far too AWOL during this election season.

We went to see Carrot Top Wednesday night at the Luxor.  Hilarious.  Great show.  If you’re a visitor, put him on your agenda.  And if you’re a local or military veteran, take advantage of the 2-1 discount.

Also went over to the Paris Resort to the dueling piano bar.

Alas, they wouldn’t let Kristen inside because she’s a “minor” (stupid, lousy rotten government nanny rules!).  But we were able to watch the show for a little while from the open windows just behind the piano players out in the hallway.  Great renditions of Hotel California and Piano Man while we were there.  Good times.

Woke up Thursday morning and had coffee on my balcony over-looking the lake and gardens.  The sun seemed brighter and the air smelled fresher. Thanks, President Trump! 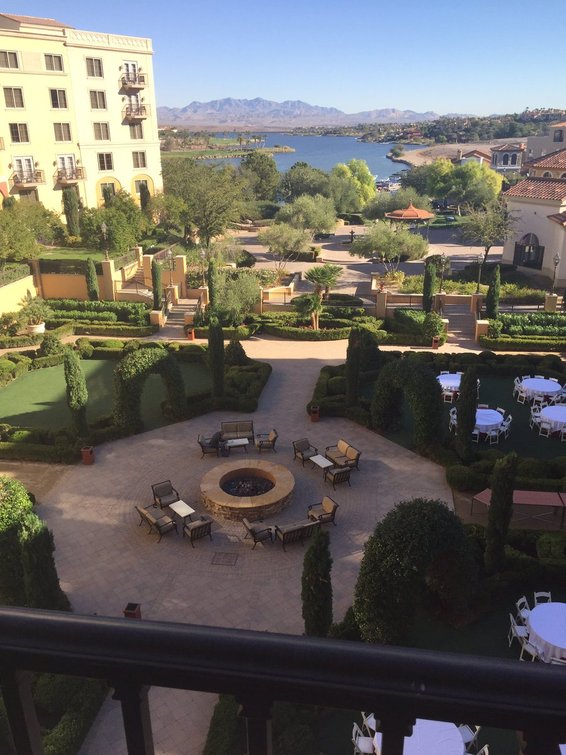 Then drove down to Hoover Dam and took the dam tour.

First time for her; first time in some 20 years for me.  Still absolutely fascinating.  Reminds us what Americans can achieve when they put their minds to something instead of belly-aching about how life’s not fair and making excuses for why something “can’t” be done.

That spirit has been revitalized with Trump’s election.  Now let’s get down to making America great again.

I lost an entire two seconds of sleep over it that night.

And if there was EVER an opportunity for the Libertarians to break out of irrelevance in a national election, this was the election to do it.  But the Gary Johnson/Bill Weld ticket crapped out.

The LP really needs to forget this fool’s errand of being a political party and transform into a super-PAC or something where they can actually make a real difference in Democrat vs. Republican elections.  This “candidate” thing of theirs is never gonna work out.

Illegal aliens who signed up to stay in this country based on President Barack Obama’s illegal executive amnesty order gave the government their identities and addresses.  Now they’re scared to death that new government knows who they are and where they live.  And now you understand why Second Amendment defenders so stridently object to registering their gun ownership with the government!

Donald Trump’s election reportedly fueled a demand for “long-acting contraceptives” from Planned Parenthood.  And seriously, I can’t think of a better way for liberals to protest Trump’s election than by refusing to have children who are more likely to grow up to be the next generation of liberals. Let’s hope illegal aliens decide to teach Trump a lesson the same way.

The Weakly Standard’s Bill Kristol – a #NeverTrumper – is pushing for President Trump to pick RNC Chairman Reince Priebus to be his chief-of-staff.  A really bad idea from a really bad dufus.

Khizr Kahn, the Muslim activist made famous at the DNC nominating convention in Philly by politicizing his hero son’s war death, is trying to keep his 15 minutes of fame alive.  He said yesterday that President-elect Trump “still must earn respect.”

No he doesn’t.  He won.  And he already has the respect of the voters who elected him.

Goofy Howard Dean is running for chairman of the Democrat Party again. Yeeaaahhhh!

FOX News’ anti-Trump eye-candy hostess Megyn Kelly has a book coming out.  Hope it, as well as her career, bombs.

“Coming up: Latest Benedict Arnold to sell out NV conservatives: @Wheeler4Nevada. Absolutely disgusting. Wait’ll you read about THIS one!”

Early this morning I received a call from a party leader asking me to withhold reporting on the situation to give him a chance to fix the problem.  As a courtesy I agreed to hold off until after I get back from watching UNLV’s football team lose to Wyoming this afternoon.

Stand by and keep your fingers crossed…

Democrats in Nevada Didn’t So Much Win as Republicans Lost

As is their wont, Nevada Republicans blew their short-lived majorities in the Legislature.

Despite having complete control of the government for the first time since the Depression, these dumb-asses exploded the size and cost of government while passing the largest tax hike in state history.  They also failed to deliver on universal school choice/vouchers.

As such, they lost their majorities in both the State Senate and State Assembly.

Both should be ousted from their “leadership” positions.

“Democrats awoke Wednesday facing something they had worked hard to convince themselves was a problem exclusively of the right: a party in crisis. Swept dramatically from power as Republicans assumed control of the White House, Senate, and House of Representatives and stood poised to make Supreme Court appointments that will dictate the direction of the judiciary for a generation, the Democratic Party is only beginning to grapple with enormous questions – everything from who will lead to what the party will stand for.” – Gabriel Debeneditti of POLITICO