Columnist John Podhoretz notes that under Obama over the last eight years “nearly 1,000 Democratic office-holders have been defeated.”

But if you think the Democrats have problems now- and they do! – wait’ll they get to 2018.

In the next election cycle, 25 Democrat U.S. senators will be defending their seats vs. 8 Republicans.

And 13 of the 25 are from states President-elect Donald Trump carried.

Remember what CoS Jim Baker did to the Reagan Revolution?  So this is definitely cause for concern among conservatives.

That said, we don’t know what all went on behind the scenes between the Trump campaign and the RNC during the election.  But Trump does.  So I just have to trust (but verify) that he’s made the right decision.  Onward… 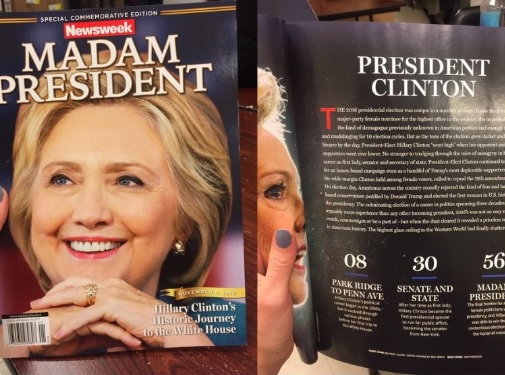 * * * As I noted yesterday, the Republican Assembly Circus last night elected Assemblyman Paul Anderson – architect of the GOP’s ten-seat loss last week – as their new Minority Leader, thanks to a sell-out of conservatives by Assemblyman Jim Wheeler-Dealer, who was appointed as Anderson’s #2. And Assemblyman James “The Big Sellouski” Oscarson was appointed as Whip.

Thus, the GOP’s return to total irrelevancy in the lower house is assured for the 2017 session.

* * * Assemblyman John Hambrick, the hapless turncoat who sold out conservatives prior to the start of the 2015 session in return for being named Speaker, was ousted completely from caucus leadership last night – just as former caucus leader Pat “The Appeaser” Hickey was ousted after the 2014 elections.

* * * Liberal blogger Jon Ralston’s slide to political irrelevance and anonymity in Nevada continues as he announced this weekend that he’s lost his regular column in the Reno Gazette-Journal, just as he’s lost his columns in the Las Vegas Review-Journal and Las Vegas Sun.  Look for his rants to next show up in the Penny Saver.

How Republicans Lost Their Legislative Majorities

(Chuck Muth) – As is their wont, Nevada Republicans blew their short-lived majorities in the Legislature.  Despite having complete control of the government for the first time since the Depression last year, these dumb-asses exploded the size and cost of government while passing the largest tax hike in state history.  Click here to continue reading

Say Adios to the Three RINOs

* * *  The Kaepernick Curse struck the San Francisco 49ers again on Sunday, as the team that continues to play the anti-cop/anti-American jerk who refuses to stand for the National Anthem lost its 8th straight game.

* * * “We are getting better.  We’ve got to get better in the win column, but we’re getting better statistically on both sides of the ball.  We’re in the wheelhouse.  We’re not far away.” – UNLV football coach Tony Sanchez BEFORE Saturday’s thrilling 69-66 victory over first-place Wyoming

“For all the talk of the coming Republican civil war and how changing demography has rendered the GOP a relic, it emerged from this week’s election arguably the strongest it has been since the 1920’s.” – Columnist Jonah Goldberg

“Some colleges and universities, alleged bastions of thinking that is at once deep and broad, have announced they have suspended classes and exams to allow their students to cope with their disappointment.  Know what causes this?  Participation trophies.

“Participation trophies are given out to kids who lose at contests: Sports, spelling bees, science fairs, whatever. The demonstrating children never went through the trauma of having lost. So when Trump defeated Clinton they had no immunity to deal with a loss.

“If kids were allowed to lose at Little League or the spelling bee they would learn that disappointment is part of life, but it doesn’t end it. You get to come back and try again next game, next season, next year and try again.” – Rich Galen, Mullings.com