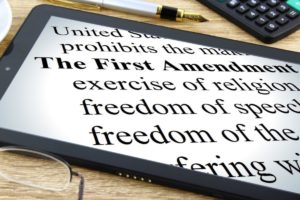 Hey, has anyone seen the First Amendment lying around?  Apparently some college campuses seem to have lost it over the Halloween holiday.

At the University of Wisconsin football game on Saturday, some jerk wore an Obama mask with a noose around his neck.  An offensive, disgusting expression of opinion to be sure.  But rising to the level of yelling fire in crowded theater?  No.

School officials made the jerk take off the mask, but patted themselves on the back for not kicking him out of the game because it was “an exercise of the individual’s right to free speech.”

But, um, if it was an exercise of the individual’s free speech, then why was the bonehead forced to remove the mask, hmm?

UW-Madison explained that the school “is dedicated to promoting a campus environment where all people feel valued, safe and able to thrive.”  It did not, however, cite which section of the Constitution this is found under.

Meanwhile, up at the University of Oregon, a female law professor “has been placed on administrative leave pending the completion of a civil rights investigation.”

What crime against political correctness did this horrible woman commit?  She wore “blackface” at a Halloween party to bring attention to “a recent autobiography by Dr. Damon Tweedy that recounts the racism he encountered in medical school.”

University President Michael Schill (such an appropriate name!) wrote in an email that wearing blackface, even at a Halloween party, “is patently offensive and reinforces historically racist stereotypes.”  He went on to declare that “It was a stupid act and is in no way defensible.”

Except, um, on First Amendment grounds.  That seems like a pretty good defense to me.

In fact, isn’t that the defense being used to excuse cop-hating, anti-American San Francisco 49’er Colin Krapperdick who insults and offends millions of Americans – especially those who have lost loved ones in defense of this nation – every time he refuses to stand for the National Anthem?

There’s enough hypocrisy here to choke a horse.  And as long as the rules governing free speech in this country are applied differently to blacks and whites, we’ll continue to have racial tensions in our society.

Indeed, has anyone seen our “equal protection” rights?  They appear to be missing, as well.

P.S.  Stuck-on-Stupid Government: Another in a Series

One of the more annoying things about government is how it regularly invents confusing, often unintelligible, terms for important public policy issues which leave the public scratching its collective heads with bafflement.  For example, “Predicate Date.”

Go ahead.  Just try to guess what that’s all about.

To make matters worse, the issue involves tobacco even though the brouhaha has nothing whatsoever to do with tobacco.  Head spinning yet?  Allow me to clear the fog…

Very happy that Las Vegan Kris Bryant got the third out for the Cubs’ first title in 108 years.

Meanwhile, over in the NFL…

Ratings are down across the board.  Chalk it up to two things…

1.)  For a few years now, the NFL has been dishing out penalties for stupid stuff like “exuberant celebrations” while “sissifying” the game.  As Keanu Reeves famously said in The Replacements, “That’s why girls don’t play the game, coach.”

2.)  It’s not that spoiled anti-cop/anti-American players like Colin Krapperdick have been insulting the overwhelming number of fans in the stands and the NFL’s armchair audience by refusing to stand for the National Anthem; it’s that the NFL and the 49’ers have condoned the behavior by not even issuing a stern rebuke.

There was a game last night.  Thought about going to Buffalo Wild Wings for a cold beer and dinner.  Then thought about Krapperdick.  And decided to stay home and watch a movie on Netflix instead.  I love football.  But starting to hate the NFL.

“Of course, many are skeptical of a potential Raiders move to Las Vegas. Some doubt the economic promise, questioning whether new stadiums produce a net gain for local economies, citing studies showing such projects typically lead to different consumer spending patterns, not more spending overall. Las Vegas, however, would probably be one of the exceptions, since its economy is so heavily reliant on outside dollars and entertainment.

“Also, it’s hard to ignore success stories like the NBA’s Thunder, which relocated to Oklahoma City in 2008. Last year, the city estimated that each home game produced a benefit of $1.5 million. And on a much grander scale, consider AT&T Stadium in Arlington, Texas.

“The complex is a huge part of the Dallas ecosystem, having played host to the Super Bowl, the College Football Playoff, WrestleMania, the NCAA Men’s Final Four, boxing, international soccer, the Cotton Bowl, countless big-time musical acts and Dallas Cowboys games. If a jewel like that gets built near the Strip, it’s only a matter of time before similar events come Vegas, which translates into new casino projects, new businesses and new jobs.”

(Chuck Muth) – Swiss watches have nothing on sugar program critics when it comes to timing and reliability.  It’s Halloween. And like clockwork, Big Candy’s minions are crawling out of their chocolate-covered graves to spook everyone with spine-tingling tales of Franken-tariffs and Quota Ghosts.

(Don Nelson of Nevada LIFE) –  It is vital that Donald Trump receive every pro-lifer’s support and be elected President of the United States.  The reasons are clear.  The unborn and their cause are in grave danger.

First and foremost, the Supreme Court is at risk.  The next president of the United States will replace Justice Scalia and likely as many as three more. The balance on the court is now 5-3 to keep abortion legal and sometimes 4-4 on provisions like partial birth abortion.”

Nevada Republican Rep. Cresent Hardy is accusing his Democrat opponent, Ruben Kihuen, of race-baiting…which is kinda like accusing the sun of warming up the day.

This column is intended to address questions some conservatives have raised about the upcoming general election in Nevada State Assembly District 21 between Republican-in-Name-Only (RINO) incumbent Assemblyman Derek Armstrong and his Democrat challenger, Ozzie Fumo.

COMING UP: My personal picks on a number of other races – including a detailed explanation on why I’m supporting several Democrats this time around!

“Hillary Clinton got quite a scare (Halloween night).  A trick-or-treater came to the door dressed as a lie detector.” – Jimmy Fallon