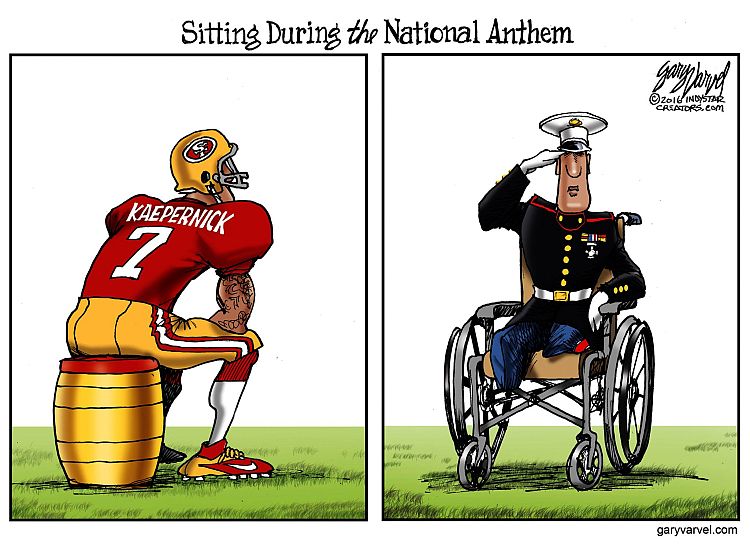 The San Francisco 49ers third-string quarterback, Colin Kaepernick, again made an ass out of himself Monday night when he again refused to stand during the pre-game National Anthem to protest supposed “white oppression.”

White oppression that pays this clown around $19 million a year to play a game.

After calling an audible “F.U.” at the TV set, complete with the extension of my middle finger, I paid my bar tab and left.

If the NFL and the individual teams won’t take actions against these disrespectful jerks – who could at least stay in their locker rooms until the National Anthem is finished if it offends them so much – I’m simply not going to watch them.

P.S.  Too many Americans – poorly educated about our founding history by government-run public schools – don’t understand that the First Amendment protects knuckleheads like these spoiled millionaire football players from government reprisals for speech, not private.  And in that regard…

Denver Broncos linebacker Brandon Marshall has joined Kaepernick’s disrespectful clown act, choosing to kneel instead of stand during the National Anthem.  So CenturyLink has chosen to cut its endorsement deal with Marshall.

“America is anchored in the right of individuals to express their beliefs,” the company said in a statement this week.  “While we acknowledge Brandon’s right, we also believe that whatever issues we face, we also occasionally must stand together to show our allegiance to our common bond as a nation.

“In our view,” the statement continued, “the national anthem is one of those moments.  For this reason, while we wish Brandon the best this season, we are politely terminating our agreement with him.”

Dennis Hof, candidate for Nevada State Assembly District 36 (Nye/Lincoln/Clark) has officially signed the Taxpayer Protection Pledge promising the people of Nevada that he will “oppose and vote against any and all efforts to increase taxes.”

Hof signed the Pledge in Reno with me and Grover Norquist, president of Americans for Tax Reform and founder of the Pledge, serving as official witnesses before Grover headed off to Burning Man.

(Disclaimer: I am a paid consultant to the Hof campaign)

“The Clintons and their Far Left allies are concealing her illness not for the sake of her privacy, but because the truth blocks their path to power. And that craven lust for power, and their willingness to tell any lie to obtain it, is what should frighten Americans about Hillary Clinton and her allies and dissuade voters from letting her, and them, anywhere near the White House.” – George Rasley of ConservativeHQ