My False Advertising Complaint vs. the Eye Doctor Lobbyists 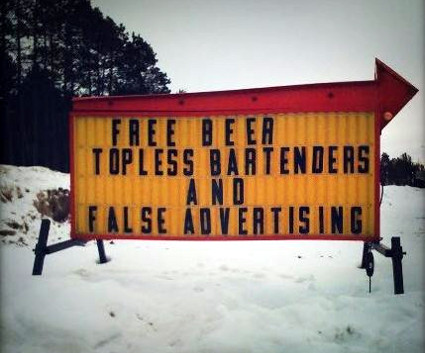 (Chuck Muth) – Dear Federal Trade Commission (hereinafter referred to as FTC).  In reading your official website, I learned that…

“When consumers see or hear an advertisement, whether it’s on the Internet, radio or television, or anywhere else, federal law says that ad must be truthful, not misleading, and, when appropriate, backed by scientific evidence.

“The Federal Trade Commission enforces these truth-in-advertising laws, and it applies the same standards no matter where an ad appears – in newspapers and magazines, online, in the mail, or on billboards or buses.”

With that in mind, I recently received a copy of what I guess would be considered a print ad put out by the American Optometric Association (AOA) that, if not outright untruthful, is certainly misleading and even more certainly not backed by “scientific evidence.”

The ad, in the form of a talking-points “Sign-On Letter,” is titled, “Tell the FTC to Withdraw its Burdensome and Costly Plan to Require Signed Forms for All Contact Lens Patients.”

In reading the text of the ad, I found the following two examples of misleading claims that arguably are a violation of our truth-in-advertising laws.  Maybe in your spare time you could look into them…

1.)  The AOA claims that “Eye doctors have dutifully complied with their requirements” related to providing prescriptions to their patients under the 2004 Fairness to Contact Lens Consumers Act (FCLCA).  To back up their claim, the AOA cites “FTC data showing a near-zero percentage of consumer complaints.”

With all due respect, I’d contend that if the AOA itself acknowledges “near-zero” complaints, that means there have been complaints and certain eye doctors have decidedly NOT “dutifully complied” with the requirements of the FCLCA.

Near-zero is not the same as zero.  I know.  I verified it with an independent scientist to back me up on this one.  Oh, and I checked with Google, too…just to be sure.

In addition, the absence of a complaint does not equate to the absence of a violation.  Americans on a daily basis experience problems for which they complain without running to the government and filling out an official government form.  In triplicate.  Using black ink only.

For example, while writing this letter my wifi went down.  But I didn’t make a federal case out of it by filing a complaint with the FWFC (Federal WiFi Commission).  I just unplugged my router, plugged it back in again, and waited for it to reset.

I’d suggest – with, admittedly, no scientific proof to back it up – that most people who are victims of eye doctors who violate the FCLCA don’t even know what the FCLCA is, let alone who to complain to even if they knew what it was, which they don’t.  Instead they just figure out how to work around it, even though it might cost them more, and go about with their lives.

The bottom line is this: By their own admission the AOA’s claim that eye doctors “have dutifully complied” with the FCLCA’s requirements is demonstrably false advertising as the number of actual violations are likely far in excess of what they claim you claim.

2.)  According to the AOA’s advertisement…

“An independent economic analysis indicated that, if finalized, the new rule could cost a solo-practitioner eye doctor practice as much as $18,000 in the first year and a high-volume, multidoctor practice could face added costs of nearly $75,000.”

This is to make sure that ALL eye doctors are “dutifully complying” with their requirements under the FCLCA, not just an allegedly “near-zero” number of them.

Now about that “independent economic analysis”…

The AOA advertisement says the report was produced by a for-profit company called “Avalon Health Economics” (AHE), which, according to its website, is able to produce “Policy Analysis” in “healthcare-focused areas.”

The private company, an LLC, also boasts that it “has the ability to quickly assemble expert teams tailored to the needs of the client” and promises that “Projects can typically be started within two weeks from initial contact.”

In other words, the “analysis” isn’t based on “scientific evidence” so much as based on whether or not a client has paid firm a fee to quickly “tailor” a report that fits the needs of said client.

And since the AHE produces reports for a fee for clients – and we have no idea who the client is that paid for this particular eye doctor report – I’d suggest the AOA claim that the information produced by AHE constitutes “independent economic analysis” is quite likely another example of false advertising.

It’s simply not “independent” if an anonymous source paid for it.  Even less so if the anonymous client turns out to be the AOA itself or some other related organization.

There are plenty of other examples of claims made by the AOA in their ad which are not truthful, quite misleading and not backed up by any scientific evidence whatsoever.

That includes the claim – totally unsupported by scientific evidence – that optometrists would be forced to fire good, competent, valuable staff employees if patients have to sign what amounts to a credit card slip confirming they received a copy of their prescription – just like they do at the local Walgreens or CVS.

Those Nigerian bank scam emails are more believable than that one.