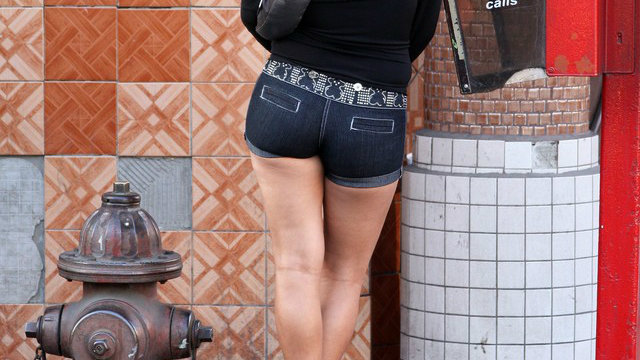 Sex worker on the street, away from legal Nevada brothels. (Courtesy: Wiki Commons)

While that idea may seem unlikely for a conservative southern Republican, the owner of the “Bunny Ranch” legal brothel in Nevada had hoped senators grilling Trump attorney general nominee Jeff Sessions would ask the Alabama senator what he thinks of hookers.

Dennis Hof, the owner of the Bunny Ranch and several other legal Nevada brothels, wants the seedy side of illegal prostitution to end with the legalization of “pay-for-play sex.”

Writing on his brothel’s website, Hof  said government pressure on his “chief nemesis” BackPage.com had forced the website to shutter its “adult services” section, and that this could help people see the virtues of legal prostitution.

“The shuttering of Backpage.com will mark the beginning of the crumbling of America’s modern illegal prostitution infrastructure, and reinforce the necessity that prostitution be legalized throughout the United States, beyond the rural areas of Nevada where regulated prostitution has proved to be a successful, safe, and sustainable socio-economic construct for consenting adults desiring to engage in pay-for-play sex,” said Hof, as part of a blog post he penned on the matter for BunnyRanch.com.

Hof said that while Sessions was questioned during the confirmation hearings about his position on pornography prosecution by Utah senator Orrin Hatch, he had not been asked by any of the committee’s members about his beliefs on prosecuting illegal sex trafficking and subsequently supporting a move towards legalization.

Neither of Nevada’s senators serves on the Senate Judiciary Committee that oversees the confirmation process.

“Take prostitution off the streets and away from the child traffickers and put it in the hands of lawful businesspersons like myself.,” Hof said. “Let the end of Backpage.com be the beginning of a new age in adult entertainment, and mark a future where sexual adventure is legally available to adults everywhere – while our children sleep safely at night.”

Column was originally published at MyNewsLA.com.

N&V StaffFebruary 15, 2022
Read More
Scroll for more
Tap
LVRJ: The Nevada Taxicab Authority should be shouting from the rooftops for lawmakers to repeal as many existing regulations as possible that make it harder for the taxi companies to adapt to the increased competition
Bunny Ranch Owner Seizes on Shutdown of BackPage.com Adult Services Advertising