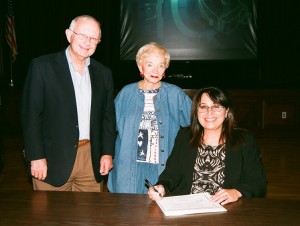 (Phil Perine) – The January meeting of the Siena Conservatives provided the forum for AD9 Republican candidate Victoria De la Guerra Seaman to sign the Taxpayer Protection Pledge. Victoria is shown signing the pledge in front of witnesses Phil Perine, president of the Siena Conservatives, and Evon Acampora. The Taxpayer Protection Pledge is a project of Americans for Tax Reform (ATR). ATR works with taxpayer groups and activists around the country to ask all candidates and elected officials to make this important commitment to taxpayers. The national list of signers can be accessed at www.atr.org.

Phil Perine completed the meeting with an in-depth presentation on the purpose and the procedures for the February 4th Republican Presidential Caucus. He made a specific appeal for all registered Republicans to check the status of their voter registration to ascertain if precincts have changed as a result of the recent redistricting. This can very easily be done at http://www.clarkcountynv.gov/depts/election/pages/default.aspx. Voters have until January 21st to register if they want to participate in the caucus.

N&V StaffOctober 3, 2021
Read More
Scroll for more
Tap
Johnson Presidential Campaign Picks Up Nebraska Party Endorsement
Your Food Will Be No Safer, But It Sure Will Cost More, Thanks to Harry and Barry