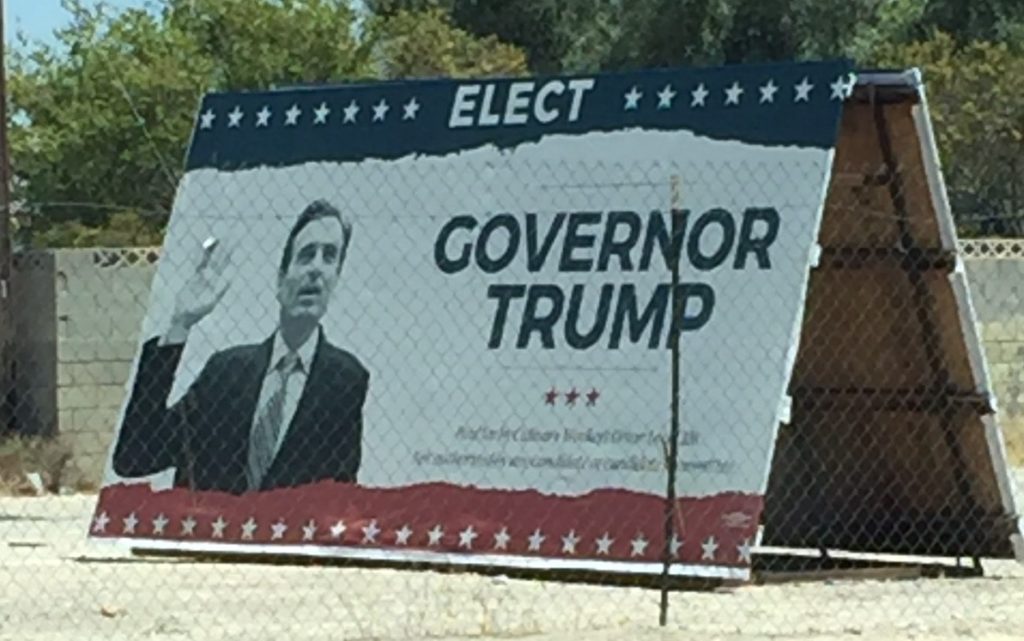 (Chuck Muth) – With Independence Day now in our rearview mirror, it’s time to look ahead to the 2018 race to replace tax-hiking/ESA-killing/Medicaid-expanding Nevada Gov. Brian Sandoval.  And the Left’s campaign to block conservative Nevada Attorney General Adam Laxalt from the seat is already moving full speed ahead.

I recently passed a billboard in Las Vegas featuring the word “ELECT” above a full-blown image of Laxalt raising his right hand, appearing to take the oath of office.  And the billboard is paid for by the militant lefties over at the Culinary Union.

Well, it’s not quite what you think.  Instead of the sign reading “Governor Laxalt” it reads “Governor Trump.”  So I think it’s fair to assume we know exactly where this campaign is heading.

Liberals are trotting out an old strategy dating back to the days of then-House Speaker Newt Gingrich, hoping Trump will be an electoral albatross around every Republican candidate’s neck in 2018.

It should be noted that when deployed against Gingrich, Republicans not only retained their House majority in subsequent elections, they actually increased it.  In addition, not only did Nevada Republicans elect a new GOP governor and U.S. senator, they also won the lieutenant governor’s seat, the attorney general’s seat, the secretary of state’s seat, the controller’s seat and the treasurer’s seat.

Ah, but Trump-hate is so deep and so wide among Democrats – combined with the absence of a compelling message that resonates with voters – the historical electoral lesson regarding such a strategy simply isn’t a consideration.

While it’s true Democrats regained control of the Nevada State Senate and Assembly in 2016, that was more a return to the status quo following the true electoral anomaly that resulted in GOP majorities in the Legislature following the 2014 “red wave” elections.

Which Republicans squandered by using the once-in-a-lifetime opportunity to foolishly sock it to Nevada’s families and businesses with the largest tax increase in state history.  Conservative GOP voters in 2016 exacted retribution by ousting a large number of those tax-hiking Republicans at the ballot box.

So Nevada Democrats didn’t actually win some kind of national trend-setting victory by regaining control of the Legislature in 2016.  Republicans simply blew it.  Yet Democrat leaders here have deluded themselves into thinking their policies and candidates won the day – kinda like the proverbial rooster taking credit for the sun rising.

The truth is the Democrats’ legislative leaders in the 2017 session were weak and bumbling.  And their legislative policy agenda was so far left and so far out of the mainstream that they couldn’t even get it past a Republican as liberal as Sandoval, who nixed much of it with a record number of gubernatorial vetoes.

Which is why they and their accomplices aren’t running on a policy agenda in 2018 but are instead running against Donald Trump.  Frankly, it’s all they’ve got.  And it will likely backfire on them as spectacularly as it did when they tried to do the same thing with Gingrich.

Those who fail to learn from history…