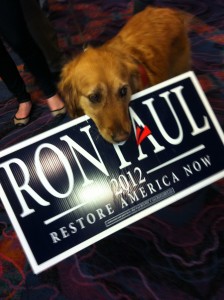 (Chuck Muth) – I know revolutions can be ugly, but the theater of the absurd on display yesterday at the Nevada Republican Party convention in beautiful, downtown Sparks, Nevada took banal inanity to the extreme. Indeed, even a poor, innocent hotdog vendor became a casualty of the Russell Crowe Convention…where the Ron Paul-aligned delegates insisted on fighting over EVERYTHING.

Indeed, one of the first orders of business was forcing a vote on removing the convention chairman who they had already voted to elect to oversee the scrum. Somehow the motion failed…perhaps some of the Ron Paul folks realized that if they got rid of this convention chair, no one else would be insane enough to agree to replace him.

Seriously, even the most innocuous, meaningless, inane matters were challenged by pointless “points of order,” points of inquiry” and even some newly-discovered “points of interests.” It was Mike Weber on steroids.

Wanna know just how bad things were yesterday? Weber was, comparatively speaking, a voice of reason and moderation. He was a piker compared the newly-minted Pauliamentarian wannabes who showed up en masse to force their will upon the Romney-led establishment GOP.

But here’s the thing: On the occasional substantive challenge, the Paul folks were in the right.

For example, for some reason the convention organizers neglected to set aside an area where guests and other non-delegates would be separate from those actually credentialed to participate. The legitimate point was raised that guests seated among delegates could participate in voicing “ayes” and “nays” without anyone knowing it.

In fact, that issue was at the root of some three hours worth of arguments, objections, yelling and shouting over what should have been the simple process of determining the official number of credentialed delegates who would be allowed to participate, you know, officially.

To his credit, new GOP Chairman Michael McDonald – who has been on the job for all of 13 days and essentially has nothing official to do with the convention – insisted on recessing the meeting for lunch and clearing the room so that the credential dispute could be resolved away from the microphones and angry hordes.

And that’s when the hotdog vendor got it.

Down in the sports bar a very nice woman was selling hotdogs and a cup of Coke for $2.50. She was pouring the cups of Coke from 16 oz. bottles. Well, this guy decked out head-to-toe in Ron Paul apparel, buttons and stickers decided that the $2.50 should include the WHOLE bottle of Coke, not just a cup of Coke and made a huge stink over it, much to the consternation of the rest of us starving souls in line.

I thought the poor lady was ready to clock him with the relish bucket. Some people, I guess, just can’t help being jerks.

Anyway, by the time the convention reconvened, security at the doors had been tightened and guests were corralled in a pen set up in the back of the room next to the media table. And with the official credentialing out of the way, it was time to adopt the official rules for the convention.

Rules? What rules? We don’t need no stinkin’ rules!

Another 2 to 3 hours of stupid, ridiculous, inane, meaningless arguments, objections and points of order – often by people who would make a braying jackass look like a Miss Manners Sunday school girl.

With the avoidable and unnecessary pain and agony over who the official participants were, where the bystanders were to be sequestered, and the rules by which the Butch Cassidy Republicans and Harvey Logan Republicans would fight under settled, it was game on.

The most entertaining – actually, the ONLY entertaining aspect of the entire meeting, was watching Republican National Committeewoman Heidi Smith metaphorically dousing herself with a 55-gallon drum of gasoline and flicking her Bic.

It was vintage Heidi Smith. “If I can’t have these mashed potatoes, nobody can. So let me burn the village down to save it.”

Smith, of Washoe County, was being challenged by Carol Del Carlo of Washoe County and Dianna Orrock of Clark County. And she has been a friendly, if not loyal, supporter of the Ron Paul folks for the past four years. As such, I suspect she assumed she would have their backing.

She assumed wrong…and it quickly became apparent that the Paul crowd’s pick was Orrock.

So in her re-election campaign speech, Smith threw Paul under the bus; telling the gathered gaggle that Mitt Romney was the only way to defeat Barack Obama (“that damned socialist!”), and even went so far as to hold up a Mitt Romney sign before sitting down to a chorus of boos.

It was a thing of beauty to behold. I mean, you do not get to witness a political suicide in person and in real time every day.

But what made Smith’s performance even more interesting was the fact that while stabbing the Ron Paul folks in the back, she inadvertently (or maybe advertently) stabbed Republican National Committeeman Bob List, who was being challenged by Interim party chief James Smack, in the heart. And here’s where those pesky rules come into play and why they are often argued in such life-and-death terms.

List is from Clark County. And in poking the Paul folks in the eye, Smith pretty much assured that Orrock would win more than the 50%-plus-one needed to avoid a run-off with Del Carlo. As such, if Orrock was elected List would become ineligible under party rules no matter how the voting turned out.

When the smoke cleared and the balloting completed (another major-league fuster-cluck in and of itself), Orrock had indeed won by a large majority. And even though List then became ineligible, the inevitable fight over his eligibility became moot after Smack also smoked List by a large margin.

Alas, the war dragged on. For some insane reason, the convention organizers neglected to print up ballots for the national convention delegate race in advance…even though they were using BLANK BALLOTS.

Making matters worse, the hotel printer being used to print the ballots that should have been printed well in advance…broke.

But at least there was a silver lining to this particular SNAFU. Since nothing could be done until new ballots were somehow printed up, some of us were able to retire to the bar and watch the entire Floyd Mayweather/Miguel Cotto fight…in which real blood was spilled!

Somewhere around the nine o’clock hour, the convention was called back into session with the balloting for national delegates completed. Exhausted from a day of mind-numbing absurdity, a motion was made to recess the convention until the next morning. The Ron Paul army was having none of it. Motion crushed. Onward.

What transpired next was a pointless, meaningless, unnecessary and ridiculously absurd fight over a pair of bylaws changes that had actually been proposed in the previous convention but had not been voted upon.

After considerable debate, discussion and argument over the pair of minor changes – one simply required that the minutes from party meetings be made available to members (duh) – both measures were approved separately and individually with nary a dissenting vote from either camp.

At which point some numbnut decided the rules required that the pair of changes be approved together in the form of a vote to approve the report of the Bylaws Committee which put forward the changes that had just been approved.

So a motion was made to adopt the report which contained the two minor changes which had just been pretty much unanimously approved. Piece of cake, right? Nothing to see here. Move along.

“All those in favor of adopting the report say aye.”

“All those opposed say nay.”

“Mr. Chairman, I call for a division of the house.”

At which point the chair asked all those in favor to stand.

“Now all those opposed stand. Thank you.”

The ayes have it.”

“Mr. Chairman, I call for an actual count.”

But you know, the guy was right.

And many, many MANY minutes later the count showed that indeed, the nays, not the ayes, had prevailed.

Another Paul victory. But for what?

The bottom line result: The Paul folks successfully voted down the approval of a report including nothing more than just the two minor changes they had already voted in favor of.

It was now pushing midnight. My head hurts. I need a drink.

Mercifully, the chief Ron Paul organizer decided that midnight was, in fact, late enough, and made a motion to recess until 9:00 a.m. Sunday morning. With no debate, the body agreed. So the circus doors are now re-opened…and like the masochist I am, I’m heading down for a couple more hours of abuse as the most contentious matters finally take the stage:

Does anyone know where that Bloody Mary bar is?

UPDATE: Before heading down to the convention, I just heard the Paul folks have captured 22 of the state’s delegates. Romney’s forces managed to win just 3 seats. Long live the insurgency!