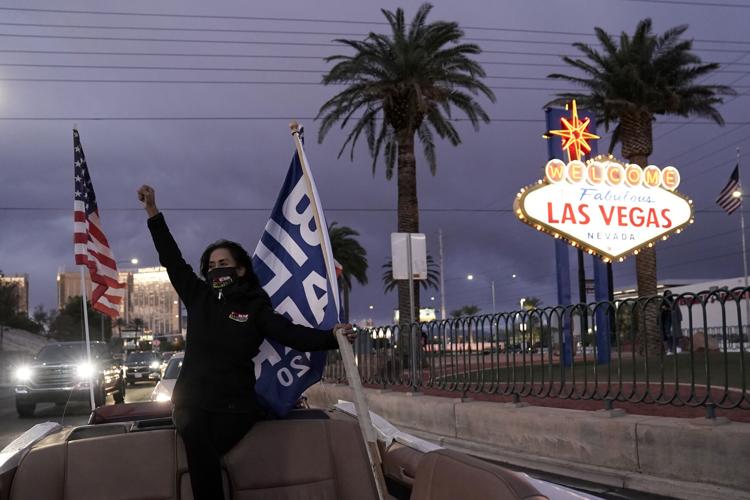 Socorro Ulloa, a supporter of President-elect Joe Biden and Vice President-elect Kamala Harris, carries flags while riding in the back of a limousine in Las Vegas, Saturday, Nov. 7, 2020.
AP Photo/Jae C. Hong

Nevada First District Court Judge James Russell wrote in his Friday decision that the campaign’s lawyers “failed to meet their burden to provide credible and relevant evidence” in their case contesting the Nov. 3 election results.

Trump campaign attorney Jesse Binnall laid out their case before Russell on Thursday, alleging that approximately 4,000 people who weren’t Nevada citizens voted in the election.

Russell wrote, however, that contestants’ expert testimony “was of little to no value,” and that he was “concerned about the failure of these experts to verify the data they were relying on.”

“Contestants did not prove under any standard of proof that illegal votes were cast and counted, or legal votes were not counted at all, due to voter fraud, nor in an amount equal to or greater than 33,596, or otherwise in an amount sufficient to raise reasonable doubt as to the outcome of the election,” the judge wrote.

The Nevada GOP said after the court’s order that Trump’s electors will appeal to the state’s Supreme Court.

The Trump campaign is also challenging certified election results in Georgia and Wisconsin, also states where the president narrowly lost.

N&V StaffSeptember 21, 2022
Read More
Scroll for more
Tap
At BYU, conservatives feel free to speak – liberals, not so much
What Congress Can Learn from Vietnam on Sugar Policy