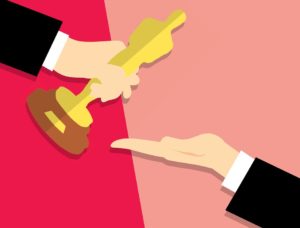 Checking in on Popular Culture

In an effort to stop the bleeding, a new Oscar will be given out next year for “Most Popular Film” – and the pampered elites are having a cow over it.

How DARE they bestow an award on a film that the average person, you know, actually likes and pays good money to see?  What are they thinking?!!

Prediction #2: As a result, much like how “New Coke” was quickly scrapped after the public refused to buy it, the swimsuit competition will be back again next year.

Can’t imagine why.  After all, the league did nothing about the anti-American kneelers for two years – then ruled a couple months ago that everyone had to stand for the National Anthem – and then quickly changed its mind and reversed its decision.

* * * Everyone has a Paul Laxalt story. My favorite memory was watching the OJ Simpson verdict come in w/the Senator & then-Human Events columnist John Gizzi in his DC office. Pennsylvania Ave outside his window was EMPTY!

* * * Considering the very special relationship between former Nevada senator and governor Paul Laxalt and former governor and president Ronald Reagan, McCarran International Airport should be renamed Laxalt International. Then everyone flying to DC can say they’re going “from Laxalt to Reagan.” And vice-versa.

Lee has thus far refused to participate.  Wonder why she’s so afraid?  Or maybe it’s her handlers who are so afraid.  Understandably so.

* * * Republican Assembly District 36 candidate Dennis Hof, another of my clients, ripped his Democrat opponent, Lesia Romanov, for saying in her first radio interview that Pahrump isn’t big enough to have more than one permanent doctor.

Apparently she’s never been to Pahrump.  They actually have an entire HOSPITAL.  And multiple health clinics and medical centers. And multiple doctors.

* * * Speaking of Hof, get ready for him to “drop the big one” on a pair of fellow Republican assembly candidates who were foolish enough to insert themselves in the brouhaha over the GOP caucus refusing to support him in the general election.

What’s good for the goose…

If you’re not on Dennis’ email list yet, go sign up NOW.  The most fun campaign I’ve ever been involved with!  www.DennisHof.com

“All I’m saying is, if you’re going to do vaccinations, do them because you genuinely believe in them, not because you think you have to – because you don’t have to.”

* * * Repeat After Me: Question 3 does NOT “deregulate” energy in Nevada.  It simply opens the energy market to REGULATED competition.  There remain legitimate concerns surrounding Question 3, but mischaracterizing what it is doesn’t help in making an informed decision.

* * * Pick up your phone.  Look at it.  Now compare it to the phones we all used to have where you dialed in a circular motion.  The difference is due to the breakup of the Ma Bell monopoly back in the ‘80s.  People thought THAT was a “risky” change, too.

Without risk, there is no reward.

“Nugget No. 1 — This move by Dennis Hof (putting up “Laxalt/Hof/Heller billboards) is both cynical and hilarious. And it also was clearly designed to bait the Heller and Laxalt campaigns to do something stupid in response. Team Laxalt kept its powder dry. But Team Heller, expert in ready-shoot-aim, gave Hof fodder by whining about a possible FEC violation. FEC! I kid you not.” – Jon Ralston