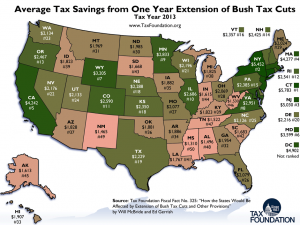 (Lori Piotrowski) – The Democrats are eagerly telling everyone they know that the Republicans are forcing U.S. citizens to support the “rich.” One of their arguments is that the Bush tax cuts were a bad idea (never mind that the president himself extended the cuts, which for most people would mean that he supports them).

A map put out by the Tax Foundation (www.taxfoundation.org) shows just how much more we citizens will pay should the Democrats decide that the tax cuts should be rescinded. In fact, a House bill sits now before the Senate that will extend the cuts. Do you think Harry Reid will allow it to be voted on?

In a state where unemployment ranges from over 11% to upwards of 20%, according to your sources, this is $2,176 that many people cannot afford to pay.

Just one more fact to put into your debate bag for when you run into a Democrat.

The map speaks for itself. Spread the news to all your family throughout the U.S.!