The ballot measure to make the state’s electric utility compete for business was backed by a group of heavy hitters in Nevada politics. 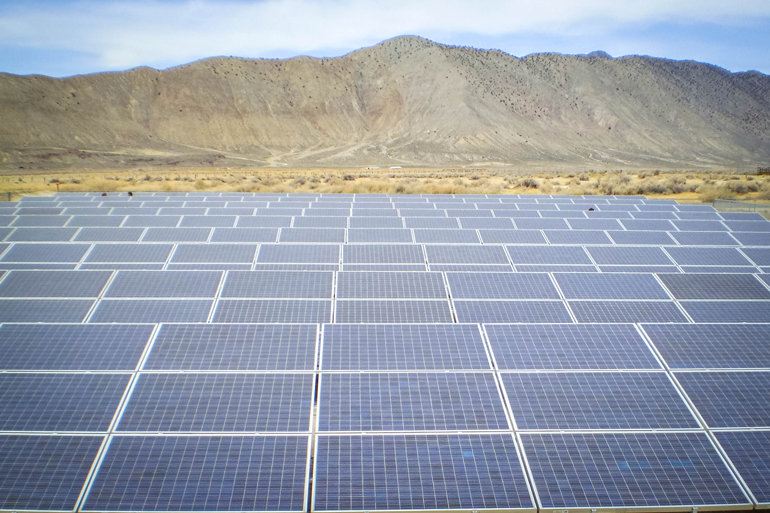 The two are part of a larger effort to amend Nevada’s constitution to force legislators to rewrite the state’s policies for electric utilities, giving customers the choice of which company they want to provide their power. The arrangement would make electric companies compete for business, rather than simply operating as monopolies in their area and charging rates set by state regulators.

The first step in that amendment process cameTuesday, when 72 percent of voters backed the plan. But it would still be a while before any changes could take effect: In order for the amendment to pass, voters would have to approve it again in 2018. Lawmakers would then have five years to overhaul the electric utility law.

Whatever the long-term ramifications, the constitutional amendment is an outlet for pent-up frustration with NV Energy, which is owned by Warren Buffett’s Berkshire Hathaway and has a monopoly in the state. The company says it’s neutral on the proposal. Big-time customers like Adelson’s Las Vegas Sands Corporation and data-center operator Switch want to buy electricity from sources other than NV Energy but have been stymied by state regulators.

Solar companies, meanwhile, are still chafing from decisions last year by lawmakers and regulators favoring the utility over solar providers, which set off an exodus of solar companies from the state. Reid, according to Nevada journalist Jon Ralston, orchestrated the amendment after repeated run-ins with NV Energy over clean energy.

“The only way we’re going to effectively change policy is by resetting the table,” said Matt Griffin, an attorney for Nevadans for Affordable Clean Energy Choices, which drafted the amendment. “We’re stuck in a rut with our energy policy, and there’s no way out of it unless we get everybody together and say: What does our energy future look like?”

Amendment 3 hadn’t received a lot of attention this year because Nevada also has competitive elections for president, U.S. Senate, several members of Congress and other ballot measures on guns and marijuana.

Switch and Sands spent a combined total of $2.4 million to promote the electric deregulation amendment. Tesla, MGM Resorts, Patagonia and Walmart have also voiced support, and the solar industry has gotten on board as well.

The only organized opposition to the amendment has come from unions, who worry that removing price controls could lead to big cost fluctuations that would hurt lower-income and middle-class electric customers.

“They’re not spending millions of dollars each to make sure that the consumers are taken care of in this. It’s about the economic well-being and the bottom line of their companies,” said Dan Hart, a strategist for the No Handouts to Billionaires campaign that’s working against the measure and is largely funded by the International Brotherhood of Electrical Workers.

The idea of deregulating an electric market certainly isn’t new: 15 states and the District of Columbia, which together have roughly a third of the country’s population, use deregulated markets. But the idea lost much of its luster following the rolling blackouts in California and the bankruptcy of the energy speculating company Enron in 2001. Nevada officials had pulled the plug on an earlier attempt to deregulate its electricity market in light of those developments.

Opponents of the current measure point to those failures as reason to stay away from further deregulation. But Griffin, the amendment’s author, says federal regulators are much better equipped to oversee electricity markets now than they were when the concept of allowing customers to choose the company that provides them power was still new.

The two sides differ over which approach is more environmentally friendly. The opponents say that an open market for electricity will encourage customers to buy cheaper but dirtier power. The proponents say the freedom to choose your own provider will let customers get an even higher percentage of their power from renewable energy than is available now through NV Energy. Plus, the amendment would specify that people have the right to sell the energy they generate on their own, such as from solar panels.

There’s also considerable dispute over whether deregulation actually lowers customers’ bills. A 2015 study by the American Public Power Association, which opposes deregulation, concluded that, between 1997 and 2014, “retail electric price increases were higher in states with deregulated electric markets than in regulated states.” In 2014, for example, customers in deregulated states paid an average of 12.7 cents per kilowatt hour, compared with 9.4 cents for customers in regulated states. But proponents of the Nevada measure say that it could lead to average savings of 20 percent on electric bills.

Finally, the two sides disagree over whether this issue belongs in the state constitution in the first place. “Why aren’t we having a discussion at the legislature?” asked Hart from No Handouts for Billionaires. “If they feel it’s obvious that this should happen, then they should be able to make that argument to the legislature.”

Griffin, the proponent, sees nothing wrong with adding electric deregulation to the state charter, especially because, he says, advocates for change have tried for years to get the legislature to look at the issue with no success. The Nevada constitution already includes provisions on marijuana, mining taxes and lotteries, he noted.