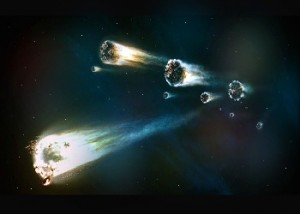 (Steven Miller/NPRI) – Most scientists believe the dinosaurs died when a giant meteor hit the earth, kicking matter up into the atmosphere that blocked the sun and ended the warm and humid climate that had reigned all over the planet during the Jurassic and Cretaceous eras. Other scientists think the radical climate change at the time stemmed from other causes. But they agree that it was because the big beasts were unable to adapt quickly enough to the new conditions — freezing in the winter and scorching heat in the summers — that the dinosaurs died out.

Imagine the cries of saurian distress that must have resounded across southern Nevada in those days. If a reporter could have interviewed the big reptiles at the time, the complaint surely would have been: “This is not fair!”

Of course, it is humans who worry about fairness. Reality itself just rolls on, attending to what works: Does an organism or species — or even a human institution — adapt effectively to the changing circumstances it faces, or does it not? If it does adapt, it persists. If it cannot — or will not — it eventually ceases to be.

In that context, consider the plight of both Nevada’s metropolitan school districts and the Nevada System of Higher Education. Whether the institutions are K-12 or higher ed, the challenges they face are quite similar.

According to conventional wisdom, of course, the problem in each case is that state funding is way below what the institutions want to spend. But while that similarity is relevant, it is not fundamental.

You’ll get closer to the heart of the matter if you note that the big school districts and NSHE also all face serious and well-documented performance issues. In short, they’ve long been living on borrowed time.

Nevada high schools graduate less than 42 percent of the ninth graders who enter four years earlier. And 30 to 40 percent of Nevada’s high-school graduates entering college — the cream of that 42 percent graduating — lack basic reading and math skills and must take remedial courses.

On the higher-ed front, the reality is similarly daunting.

“UNLV is noted for being one of the highest-paying universities in the country and one of the lowest in the delivery of a quality education,” notes Rollin Karnehm, a Ph.D. management consultant. Karnehm was hired in 2009 and 2010 by UNLV to set up career development for business-school students seeking MBAs.

In February, Karnehm wrote two Nevada state senators that he’d been “appalled at the waste” he observed in just nine months.

He reported “an extreme amount of featherbedding going on through the creation of numerous administrative support positions in an environment where the work could have been covered by less than 1/2 the personnel.”

Professors were absent during more office hours than they were present to help students, said Karnehm. “I also observed professors canceling classes in lieu of basketball and football games.”

He often “listened to the frustration of the students who expected a quality education in the College of Business only to discover that their degree was worth very little because of the school’s low national rating.”

“A good example,” he said, was the fact that the case-study method — which leading national MBA programs use — initially was not being used at UNLV. It was instituted, however, as part of the project Karnehm was involved in to build up the College of Business.

“We got some case studies from Harvard, and we trained some of the professors in how to do it,” said Karnehm. Unfortunately, however, the college still is not competitive.

Moreover, at UNLV, “in more than one case, you’d have a professor who’d be conducting the case study in class, but didn’t know what the results should be. In other words, he hadn’t really done his homework. He wasn’t prepared himself. And that was discouraging.”

Karnehm — whose company website says he has advised and coached executives in over 300 U.S. companies, ranging from medium-sized to Fortune 500 and 100 firms — was asked to suggest possible sources for UNLV’s quality problems.

“In large measure,” he said, “I found the attitude was, ‘I won’t confront you about [your failings] if you won’t confront me about mine.’ You find that kind of behavior a lot in low-performing organizations.”

Partisans of the university may feel stung by Karnehm’s perspective, but the evidence is clearly on his side. The university’s own senior professor of social work, William M. Epstein, noted in the Las Vegas Review-Journal last year that UNLV’s “volume of faculty publication is among the lowest of any comprehensive university, let alone any flagship university, in the United States.”

So, Nevada’s government-funded education systems — whether K-12 or higher-ed — are clearly struggling. And, given their manifest lack of preparation for the challenges of Nevada’s newly harsh economic environment, the dinosaur metaphor for these huge, sprawling institutions does seem apt.

Indeed, their capacity to adapt to new environments is, by the very nature of these institutions, severely handicapped. And — when one considers not only the new economic environment but also the emerging educational technologies — these dinosaurs’ day may well be over.

The fundamental problem they face was first identified by economist Ludwig von Mises:

When programs are funded by government, rather than through the voluntary exchange of willing buyers and sellers in the marketplace, prices no longer convey the powerful market signaling that allows genuinely useful economic calculations. Now prices only mirror the arbitrary wishes of politicians or bureaucrats, and the kind of entrepreneurial calculations required for building cost-effective and thus successful enterprises become impossible.

The classic, real-world demonstration of this problem, of course, was the late Soviet Union. A multitude of socialist economies in the Third World have also proven the point.

However, even in nations that are largely capitalist, the socialist sectors of those countries’ economies also amply demonstrate the principle.

Nevada’s government-funded sectors are a case in point: When services are not voluntarily purchased by users but are instead selected by government — using tax dollars coerced from taxpayers — the politically powerful routinely benefit the most, at the expense of the less powerful.

Thus, it is no coincidence that Nevada’s thoroughly socialized government-education systems for decades have produced systematic failures quite similar to those produced by socialist government cartels elsewhere in the world.

Wall Street heavyweight Warren Buffet once observed, “It’s when the tide goes out that you learn who’s been swimming naked.” And sure enough, as the funny-money financial tides have receded all across the U.S. and Europe, the public sector of nearly every nation has been revealed as a bundle of bare-bottomed Ponzi schemes, full of the vacuous socialistic conceits for which someone else, as always, has been expected to pay.

Nevada is the state most impacted by this new global reality. We are a much poorer society, in truth, than our always-ravenous political class will admit. While the working people of this state know the old world is gone, those who live off of taxpayers bellow in frustration and denial.

They are adapted to a world which is gone, and they don’t like it a bit.