Nevada’s “Mitt Romney” Suits Up to Choke Once Again 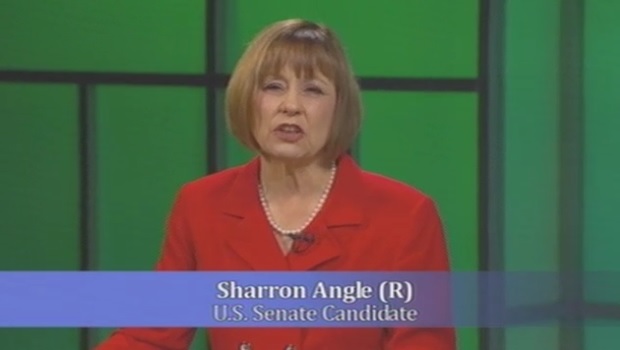 (Chuck Muth) – OK, if you you’ve got joy, joy, joy, joy down in your heart that Sharron Angle decided to run for the United States Senate again this year, well, you probably ought to just stop reading RIGHT NOW.

Angle is Nevada’s Mitt Romney.  As Donald Trump would put it, she’s a “choker.”  And once a choker, always a choker.

Angle was – as many of us knew – the ONLY candidate who could have possibly lost in 2010 to Sen. Harry Reid, perhaps the GOP’s most reviled Democrat in office at the time.

For many of us, though, it came as no surprise.  Indeed, Angle’s only election victories came over a dozen years ago in a tiny state assembly district with a “yuge” Republican registration majority.  Big whoop.

She then ran against the late State Sen. Bill Raggio in the 2008 Republican primary.  Raggio was a tax-hiking, government-growing moderate who was ripe for the picking.  It should have been a slam dunk for Angle.

And both Nevada and the nation were forced to suffer an additional, totally unnecessary six hellish years under the Republican-hating, left-wing reign of Harry Reid.

Now, like a bad case of herpes, she’s back; throwing her hat in the ring to challenge Republican Congressman Joe Heck in this year’s GOP U.S. Senate primary.

For pure ego, that’s what.  Because it sure isn’t for the good of the conservative movement, the Republican Party or the state of Nevada.

For his part, Heck brings a lot to the table.

For one, he’s a doctor.  Which will give him a unique and valuable perspective when it comes time to repeal ObamaCare and replace it with something much better.

He’s also an active duty brigadier general.  Which gives him a unique and valuable perspective when it comes to dealing with military matters in this ongoing era of radical Islamic terrorism.

Now, does Rep./Dr./Gen. Heck have a voting record as conservative as I’d like?  Frankly…no.

And Nevada is the only Senate race this year where Republicans have a realistic chance to pick up a Democrat seat.

In fact, Nevada’s Senate race might very well determine whether Republicans or Democrats control the Senate next year when that Supreme Court vacancy finally gets filled.

The bottom line is that Angle has ZERO chance of beating Heck in the primary. The big-time money backers who filled her campaign coffers with over $20 million space bucks in 2010 have shut their wallets tight this time around.

Fool me once, shame on you and all that.

So the only thing Angle can do is to bloody Heck up and radicalize some conservatives into voting against him in what will surely be a nail-biting, barn-burner race against Reid’s hand-picked Democrat successor in November, Catherine Cortez Masto-Reid.

The only good that can come of Angle’s candidacy this year is the possibility that it’ll finally be the stake that’s driven through her self-serving, misguided political heart.