Mitchell: Newspaper has a couple of takes on lawmakers practicing medicine without a license… or a clue

Mitchell: Newspaper has a couple of takes on lawmakers practicing medicine without a license… or a clue
N&V Staff 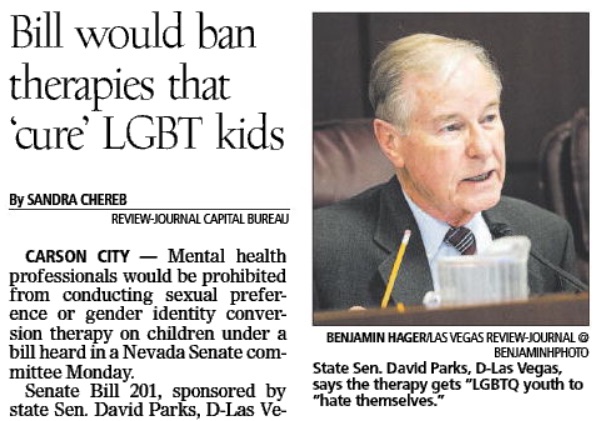 (Thomas Mitchell, 4TH ST8) – This is one of those days when I really wish the morning newspaper still allowed online comments about its stories and columns. The interplay of comments could be quite interesting and probably quite heated — picture heads exploding.

On the cover of the Nevada section today, there is a story about a state senator introducing a bill that would ban psychotherapists from providing sexual orientation or gender identity conversion therapy for people under the age of 18. (Is that practicing medicine without a license, Mr. Legislator?)

“Senate Bill 201, sponsored by state Sen. David Parks, D-Las Vegas, and a host of other lawmakers, would ban the practice, which has been denounced by major medical groups and condemned by critics as leading to anxiety, depression, substance abuse and suicide among LGBT young people exposed to it,” the news story relates, without noting that Parks has been described as the state’s first openly gay lawmaker. Nowhere in the article were Parks’ “scientific” contentions challenged, though opposition for various reasons — such as parental and religious rights — was reported. The word “cure” in the headline is in quotes.

(For the record, SB201 specifically states: “A psychotherapist shall not provide any sexual orientation or gender identity conversion therapy to a person who is under 18 years of age regardless of the willingness of the person or his or her parent or legal guardian to authorize such therapy.”)

Then a couple pages later there is a column by Victor Joecks basically calling the fundamental premise of the bill pure quackery.

Joecks somehow managed to uncover some evidence contrary to the presumptions underlying the bill:

The science, however, isn’t what proponents assert, and looking at the evidence undercuts the bill’s rationale. In a review of almost 200 scientific papers published in The New Atlantis Journal in Fall 2016, Dr. Paul McHugh, a professor from Johns Hopkins University, and Dr. Lawrence Mayer, a scholar in residence at Johns Hopkins University, found that scientific evidence doesn’t show sexual orientation and gender identity are immovable.

“The understanding of sexual orientation as an innate, biologically fixed property of human beings — the idea that people are ‘born that way’ — is not supported by scientific evidence,” they write. “The hypothesis that gender identity is an innate, fixed property of human beings that is independent of biological sex — that a person might be ‘a man trapped in a woman’s body’ or ‘a woman trapped in a man’s body’ — is not supported by scientific evidence.”

McHugh and Mayer find that 80 to 95 percent of youths who have transgendered feelings “abandon them as they mature.”

SB201 would prevent counselors and therapists from helping these youths in any way process and navigate their changing feelings about sexual orientation or gender identity — even if the child is desperate for professional help.

Perhaps someone should recommend to the sponsors of the bill psychotherapy for delusions of grandeur and infallibility?

It is one thing to argue that such therapy is ineffective or even damaging and possibly futile but to deny people the right to try something “regardless of the willingness of the person or his or her parent or legal guardian” is the height of arrogance and presumptiveness. This gives new meaning to the term nanny state.