(Brandon Katz , Forbes) At this point, NFL fans have to wonder if the league is ever going to publicly address its declining TV viewership. As the ratings continue to shrink, so too does the advertising money, hitting the league where it really hurts. Last night was no different.

NBC’s Sunday Night Football was down yet again in viewership, drawing in 16.68 million viewers and scoring a 6.19/19 rating in the advertiser friendly 18-49 demo. The numbers mark a season low forSNF and the show’s 11.0 overnight rating is the lowest total since 2007(ouch). While the NFL still won the night in total viewers, those numbers mark a steep drop from last week’s 18.62 million/6.8 ratings and the week before’s 20.6 million/7.4 rating.

The NFL was done no favors by the matchup with the Pittsburgh Steelers dominating the Kansas City Chiefs in a sleep-inducing 43-14 rout, but the league is accustomed to being quality proof. In years past, it wouldn’t matter if it was a blowout or a nail biter, SNF was TV’s king. Since 2011-12, Sunday Night Football has finished as TV’s top offering in the 18-49 demo and total viewership. While football is on pace to repeat that feat again, the margin of victory is shrinking rapidly. 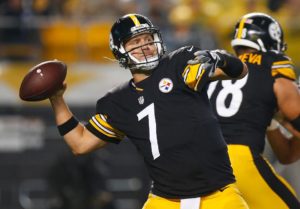 PITTSBURGH, PA – OCTOBER 02: Ben Roethlisberger #7 of the Pittsburgh Steelers drops back to pass in the first half during the game against the Kansas City Chiefs at Heinz Field on October 2, 2016 in Pittsburgh, Pennsylvania. (Photo by Justin K. Aller/Getty Images)

Many point to San Francisco 49ers quarterback Colin Kaepernick as the root cause of the NFL’s ratings problem. Kaepernick’s National Anthem protest has continued to spread across the league, prompting #BoycottNFL campaigns online and fan outrage. As of now, the league has not made any attempts to block these protests.

Another factor in declining viewership is the increasing turn to digital streaming. NBC Sports chairman Mark Lazarus sees that as the biggest opponent to the standard model.

“We’re on a different growth trajectory,” Lazarus told Variety in September. “But on the whole, we’re all susceptible to that same cord cutting, cord shaving, skinny bundle world. And I think that puts significant downward pressure on all of the video businesses, not just sports.

“I think it’s going to be about how we keep score [in the future]. I think you’re going to have as many people watching. They’re just going to be watching in various ways.”

The truth is likely a combination of the two. Opposing viewpoints between NFL players and the league’s fans combined with increased viewing options have led to a smaller piece of the ratings pie. But what’s most curious about this situation is the league’s refusal to comment on it publicly. A quarter of the NFL season is now in the rearview mirror and the league is on pace for its worst ratings in more than a decade.

At what point does the NFL drop the charade and try something new?

N&V StaffMarch 14, 2017
Read More
Scroll for more
Tap
8 Things You should Know about the Las Vegas Dome Stadium Proposal
Since Shallow Graves are Illegal, There’s Only One Way to Deal with Raiders’ Owner