No Truce with the Left

No Truce with the Left
N&V Staff

(Daniel Greenfield) – There comes a time when every conservative thinker tries to find some common ground with the left in some area. Today it’s criminal rights and the headlines have Rand Paul denouncing the racist justice system while Grover Norquist and the Koch Brothers join with the left to back their reforms. As usually happens, the conservatives or libertarians turn out to be the useful idiots of the left. 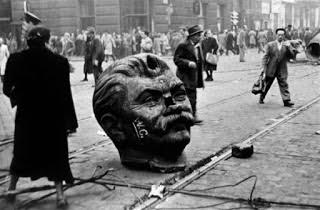 Liberals have a long history of being the left’s useful idiots. It’s only fair that libertarians get a turn.

Republicans are still trying to figure out a truce on gay marriage. They retreated to civil unions, then accepted a full defeat on gay marriage and then acted baffled when Christian bakery owners were dragged into court for refusing to participate in gay weddings. When the left insisted that gay marriage was a civil rights issue, they refused to take them as their word.

Now they’re wondering how an accommodation can be made with tranny rights. A brief look back at gay rights will show that the only possible accommodation is one in which men in dresses have a legal right to use the ladies room and every single closed female space and event. And yes, that means your business will be shut down if you object to Steve using the female locker room.

After a few skirmishes, some fundraising and angry letters, the accommodationists will find ways to accommodate that and we can look forward to conservative activists eagerly crowing about the first gay Republican presidential candidate around say, 2024, and the first Republican man in a dress in the Senate around the same time.

Of course by then it will be something else. Maybe pedophiles. Gay rights activists don’t like the analogy, but their movement and its assorted allies, particularly in Europe’s Green parties, have a long history of advocating it. The same pop culture methods that were used to sell gay rights and Bruce Jenner can easily be flipped around to sell NAMBLA.

By 2024, the Republican gay and tranny candidates will be dismissed as tokens while the media oohs and aahs over a vocal and charismatic campaigner for some other love that dare not speak its name.

And that’s the point. It has always been the point.

The left does not care about gay rights. If you doubt that, consider how many of the left’s favorite Muslim countries have gay rights. The left has recently divided its campaign passions between gay marriage and defending Iran. Iran denies the existence of gays and hangs them where it finds them.

The USSR treated homosexuality as a crime even while it was recruiting gay men as spies in the West. Cuba, the darling of the American left, hated both gays and blacks. The ACLU backed the police states of Communism. If the left supports an enemy nation, the odds are excellent that it is also a violently bigoted place that makes a KKK rally look like a hippie hangout.

To understand the left, you need to remember that it does not care about 99 percent of the things it claims to care about. Name a leftist cause and then find a Communist country that actually practiced it. Labor unions? Outlawed. Environmentalism? Chernobyl. The left fights all sorts of social and political battles not because it believes in them, but to radicalize, disrupt and take power.

The left does not care about social justice. It cares about power. 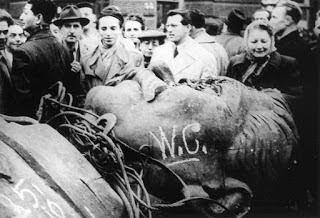 That is why no truce is possible with the left. Not on social issues. Not on any issues.

The left is a drunk in a bar trying to pick a fight with you. Trying to convince him that you didn’t disrespect him, put something in his beer to make him dizzy or make his feet so heavy won’t work. There’s no ‘agree to disagree’ possible here. He’s picking a fight with you because he wants a fight.

The left does not care about Bruce Jenner. It does not care about gay rights, equal pay, police brutality or even slavery. Its activists ‘care’ about those things a great deal right now, but they could easily be persuaded tomorrow to be outraged by telephone poles, shredded wheat or people in green sweaters.

They care mainly about emotional venting and exercising power over others. It’s the same phenomenon witnessed during the Salem Witch Trials, the French Revolution or any other mob scene. Except the individual elements of the mob are on social media and have a hashtag.

The outraged social justice warrior was laughing at tranny jokes a few years ago. Now he’s ready to  kill over minor verbal missteps. A few years from now he’ll be laughing at them again.

There’s a long human history to such atrocities, to mobs whipping themselves up into spasms of manufactured outrage, subsuming their own doubts, confusion and unhappiness into the ’cause’.

The cause is progress, but the real cause is the power of its enforcers to vent their unhappiness and destructive impulses on everyone else under the guise of reform.

These changes have the mad logic of a byzantine ideology behind them, but to the ordinary person their definition of progress seems entirely random.

Republicans, conservatives, libertarians and other class enemies cannot possibly ‘progress’ enough to be acceptable to the left because it identifies progress with political conformity. A tolerant and progressive Republican is a contradiction in terms.

If he were truly tolerant and progressive, he wouldn’t be a Republican.

The left’s social justice program is really a wave of these purges which force their own people to hurry up and conform to whatever the Party dictated this week. Examples are made out of laggards on social media to encourage the rest to stop thinking and start marching in line. As Orwell knew well, these shifts select for mindless ideological zombies while silencing critical thinkers.

These changes are a test of reason. If you can reason, you fail. If you can Doublethink, you pass.

The constant shifts create their own version of future shock. They leave people baffled and uncertain. Society no longer seems to resemble what they knew, even though the real society of men and women has not really changed much, only the media’s presentation of it has. But a beaten down mass of ordinary people now imagines that the country is filled with gay men and trannies. They accept that what they thought was common sense no longer applies and that it’s someone else’s country now.

And that is the prize that the left dearly wants. Surrender.

The left’s media machine makes its madness seem cool even though behind all the agitating young things are a bunch of bitter old leftists. But the madness is a means, not an end. So is the facade of revolutionary cool to each shift. 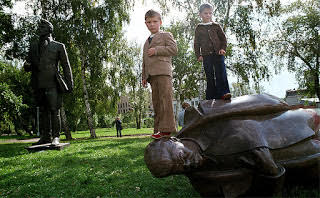 The Futurists of Russia vowed to heave the past “overboard from the steamship of modernity”. But when the Revolution came, the classics came back into the libraries and the Futurists were forced to stop drawing triangles and make their art conform to the conventional structure of a totalitarian state.  The time of change had ended. Once the left was in power, the future became a lot like the past.

The left exists to destroy you. It does not seek to co-exist with you. Its existence would lose all meaning. Any common ground will be used to temporarily achieve a goal before the useful idiots are kicked to the curb and denounced as bigots who are holding back progress.

The purpose of power is power. The left is not seeking to achieve a set of policy goals before kicking back and having a beer. The policy goals are means of destroying societies, nations and peoples before taking over. If you allow it a policy goal, it will ram that goal down your throat. It will implement it as abusively as it can possibly can before it moves on to the next battle.

More fundamentally it’s about the difference in human nature between the people who want to be left alone and those who want power over others.

You can’t work out a truce with tyrants. You can give in or stand up to them. There’s nothing else.

A version of this column was originally published on Daniel Greenfield’s blog at Sultan Knish.