Obama preaches his clean energy heresy to the choir 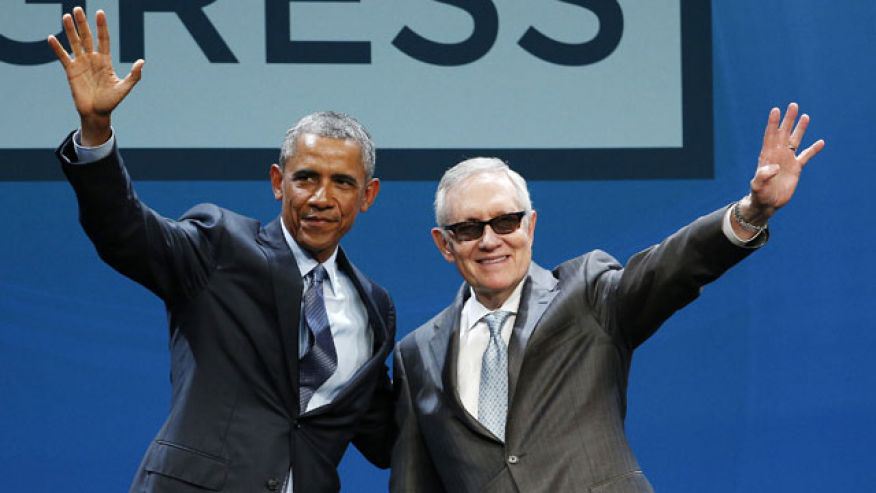 “We refuse to surrender the hope of a clean energy future to those who fear it and fight it, and sometimes provide misinformation about it,” he charged, according to a White House transcript.

But it was Obama who was spreading the misinformation, including his constant drumbeat about the immediate and devastating threat of climate change. There has been no significant increase in global temperatures in 20 years, despite what the climate change models all predicted.

Earlier in the day, John Podesta, head of the Center for American Progress, one of the sponsors of the National Clean Energy Summit 8.0, cited the claim that July was the hottest month on record. But satellite readings dispute this and the hundredths of a degree increase from land-based readings was well below the margin of error.

Obama also had the audacity on the same day his administration announced billions of dollars in new loan guarantees for renewable energy projects to claim renewables can compete in the free market against fossil fuel power generation.

“A lot of Americans are going solar and becoming more energy efficient not because they’re tree huggers — although trees, you know, are important — just want you to know — but because they’re cost-cutters.  They like saving money,” Obama said. ” And I’m all for a consumer saving money, because that means they can spend it on other stuff.  Solar isn’t just for the green crowd anymore — it’s for the green eyeshade crowd, too.”

This came days after NV Energy hit a cap on rooftop solar installations and stopped issuing permits until the PUC revamps the pricing structure for rooftop solar. The rooftop panel installers claim the proposal by NV Energy — to charge a connection fee and cut in half the per kilowatt-hour credit for uploading excess power to the grid — will put them out of business, because rooftop panel owners would be paying more for electricity than other power users.

Without tax breaks, tax credits, subsidies and high sell-back rates, solar does not yet pencil out.

Obama also lashed out at opponents he claimed were “trying to undermine competition in the marketplace, and choke off consumer choice, and threaten an industry that’s churning out new jobs at a fast pace.”

Study after study has shown that for every green energy job created by taxpayer subsidies and higher power cost at least two jobs in the rest of the private sector are lost.

Earlier this year Obama linked an increase in hurricanes to climate change, even though no major hurricane has hit the U.S. in nine years.

In introducing Obama, Reid also repeated the false hurricane narrative, “Protecting the earth’s climate is the greatest challenge of our time. Does everybody agree? (Applause) You see this climate change doesn’t affect a particular people or industry or region or country. Climate change affects everybody, every American, every human being on the face of the earth, no matter where they live. From record break droughts in the Southwest to coastal flooding in the East, we’re seeing the impacts of increasing temperatures and rising sea levels. Hurricanes are becoming more frequent and that’s an understatement. …”

He then claimed that rising temperatures are breeding ticks that have killed 30 percent of the moose population in the Northeast. The nexus is tenuous at best.

Obama and Reid never let the facts get in the way of their drive to dole out taxpayer money to their cronies and contributors in the green energy industry.

Obama even joined Reid in his attacks on the Koch brothers:

But while change this fast presents new opportunities, it is invariably going to create resistance from some fossil fuel interests who want to protect the old, outdated status quo.  And there are some legitimate issues around how does a new distributed system work, and folks have some costs and how do we deal with those things, and those are important for us to address.  But when you start seeing massive lobbying efforts backed by fossil fuel interests, or conservative think tanks, or the Koch brothers pushing for new laws to roll back renewable energy standards or prevent new clean energy businesses from succeeding — that’s a problem.  That’s not the American way.  That’s not progress.  That’s not innovation.  That’s rent seeking and trying to protect old ways of doing business and standing in the way of the future.

I mean, think about this.  Ordinarily, these are groups that tout themselves as champions of the free market.  If you start talking to them about providing health care for folks who don’t have health insurance, they’re going crazy — “this is socialism, this is going to destroy America.”  But in this situation, they’re trying to undermine competition in the marketplace, and choke off consumer choice, and threaten an industry that’s churning out new jobs at a fast pace.  (Applause.)  And that has the potential to hurt a lot of communities — and set back America’s leadership in fighting climate change.  They’re even fighting to protect billions of dollars of taxpayer dollars in corporate welfare each year that’s going to fossil fuel companies.