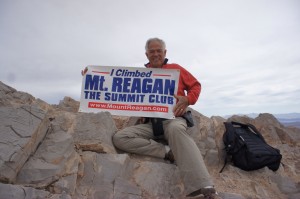 (“Mt. Reagan,” Nevada)– Today, on the 102nd anniversary of President Ronald Reagan’s birth, Citizen Outreach formally submitted an application proposal to the Nevada Board of Geographic Names to officially designate the 4,052-foot summit at the top of Frenchman Mountain – located between the Las Vegas valley to the west and the Lake Mead National Recreation area to the east – as “Mount Reagan.”

“Naming a mountain after Ronald Reagan seems entirely appropriate as his life’s accomplishments were monumental and seismic,” writes Reagan biographer Craig Shirley, author of Rendezvous with Destiny: Ronald Reagan and the Campaign that Changed History. “His character and integrity were stronger than granite.”

The Nevada Board will consider the proposal at its next regularly-scheduled meeting in May, when project organizers intend to submit letters and petitions demonstrating support for the naming proposal from around the country, and especially from Nevadans.

“Ronald Reagan had a long and positive relationship with the Silver State,” writes former Nevada governor and U.S. Sen. Paul Laxalt. “He loved Nevada and Nevadans loved President Reagan. As such, it makes abundant sense to name a Nevada mountain in his honor.”

The Mount Reagan Project is an effort associated with the Reagan Legacy Project which was launched over a decade ago by Americans for Tax Reform. The goal of that project is to name something significant after the 40th U.S. president in every state. To date, no such significant commemoration of President Reagan exists in Nevada.

“Ronald Reagan led America forward to defeat the threats to our prosperity of high taxes, inflation, and recession at home and a surging Soviet Empire abroad,” writes Grover Norquist, president of Americans for Tax Reform. “He left America stronger, freer, and safer than the day he became President. Adding his name to the short list of great American presidents who have mountains named after them is an honor richly deserved.”

There are only 12 American presidents who currently have mountains or mountain peaks named after them in the United States.

“Ronald Reagan triumphed over personal, professional, and political challenges with a smile on his face and love in his heart,” concludes nationally-syndicated talk-show host Roger Hedgecock. “What better for the entire Las Vegas valley than Mount Reagan greeting each new day with hope and inspiration for all who live in its magnificent view.”