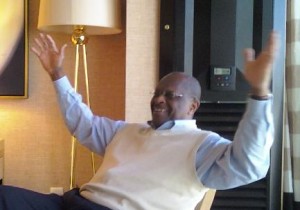 On Friday, May 6, we invited a handful of bloggers, reporters, and photographers to gather in Herman Cain’s hotel suite at the Encore to talk politics and issues. Cain was laidback and casual, even shoeless, but spirited nonetheless. He was fresh off a win in the Republican presidential debate held in South Carolina, and some of that winning high was still visible. – Ed.

Reporter:         Did you have some time to celebrate after the debate?

Cain:                No.  There was no time to celebrate.  Afterwards, I shook hands with all of the Fox commentators and went backstage to the green room. My team was there high-fiving and celebrating, and I asked them why.  That’s when I heard that Frank Luntz was reporting the overwhelming response to my performance in the debate.  Then I was surrounded and barraged by media outlets who wanted to do follow up questions while I was on my way to do the Sean Hannity Show.  So it was quite a surreal experience.

The debate last night was a pivotal moment in the Herman Cain journey to make a decision to run for president.  People ask, “How much did you have riding on this?”  Our plan was to evaluate the next phase based upon this phase.  In all honesty, if in this phase none of the candidates had distinguished themselves, then I probably wouldn’t be anticipating a Hold The Date of May 21.  Write that down, Chuck.  Put down in Atlanta Olympic Centennial Park.  Now do you think I’m going to be holding the date and having a rally in Centennial Park on May 21 to tell you that I am not running?  You make the call.

Reporter:         Why run for president?  What do you hope to accomplish?  What sets you apart from the pack?

Cain:                I’m running for president for several reasons.  One is my own personal motivation because I feel an obligation to use my skills, abilities, talents, and experiences to try to help this country.  I have three grandkids, and it’s not about us – it’s about the grandkids.  I could very easily take the security that I have developed over the last 40 years to go into cruise control, but my faith says you’re not supposed to do that.  You’re supposed to use your talents, skills, and abilities to make a difference.  The second reason is, and I alluded to this last night a little bit, I am an American black conservative, proud to be an American black conservative.  I am running as a Republican for the second time in my life, and I don’t want to give the Republican Party an opportunity to screw this election up.  They screwed it up the last time.  We had a candidate who could not win.  Everybody knew it except the Republican insiders.  We knew John McCain wasn’t going to beat Barack Obama.  All you had to do was open your eyes.

Last night, one of the questions asked about my supporting Mitt Romney in 2008.  I did support him. He was a businessman and I figured that if he knew how to create jobs then he could solve problems.  So, why am I running if I supported Mitt Romney?  He didn’t win!  Am I supposed to sit back and hope that Mitt can do something this time that he didn’t do the last time, or any of the other candidates?  I respect all of them.  They are great candidates.  They bring a lot to the party.

Reporter:         Do you consider yourself a Tea Party candidate?

Cain:                Yes, because I define a Tea Party candidate as anyone who believes in fiscal responsibility, the free market system, and enforcing the constitution.  That’s the mantra of the Tea Party movement.  I have been a believer in that mantra from the beginning.  My first Tea Party speech was in Las Vegas, April 15, 2009.

I happened to be in town giving a speech at a convention and they heard that I was here and invited me out to speak.  That was my first Tea Party event.  They were expecting 600 people and ended up with 2,600 people, which was great.  It was a great day.  And this is just sort of a side note, it had been cloudy and then when they introduced me to speak the clouds opened up, and the sun came down.  Didn’t it Chuck?

Cain:                The attempt on the part of the mainstream media to denigrate the Tea Party movement is because they don’t have another tactic to try to hold it back.  They can’t stop it, so name-calling and labeling is all they have.  So yes, I do identify myself with the Tea Party group.

Reporter:         How important is it to get the support of Nevada voters?

Cain:                Well, Nevada is critical because it’s one of the early primary states and, like it or not, the early primary states, Iowa, New Hampshire, South Carolina, Nevada, are all part of creating that momentum that you would need going forward.  Those states, including Nevada, have demonstrated that they’ve done a pretty good job of vetting the presidential candidates.  Everybody knows about the historical significance of the other three states, but a lot of people underestimate the significance of Nevada.  This is the first major western state to say yeah or nay on a particular candidate

Reporter:         What about as president, how important would Nevada be in your administration?

Cain:                It would be very important.  You’ll never hear President Herman Cain saying “Don’t go to Las Vegas.”  It’s one of my favorite cities!  Gaming is an industry, and gaming is a recreational activity for a lot of people, and it’s legal.  It’s organized.  It’s regulated and managed here in Nevada better than any other place in the country.  So, from that standpoint, Nevada would be important.

Reporter:         What about the Amero?  You know there’s talk about joining the Canadian, US, and Mexican currency much like they did over in Europe.

Cain:                I don’t want an Amero; I want a strong dollar.  I do not agree with this move to create a single currency for Canada, United States, and Mexico, and here’s why.  The United States economy, even with its hiccups, is still the strongest and the most solid of those three countries.  If we agree to an Amero agreement, that would drag down the value of our currency.

Secondly, Mexico’s government is becoming more and more unstable, and that means that their currency is going to become more and more unstable.  Why would you want to enter into an agreement with a currency that’s declining in strength when we could very simply increase the strength of our dollar if we do things we need to do – get serious about lowering the national debt, stop creating a deficit every year, and really stimulate the economy.  I don’t want to create a single currency with a nation that has allowed the drug cartels to confiscate the country.

Reporter:         The biggest issue is the economy.  Everyone says that they’re going to create more jobs.  How are you going to do that?

1. Lower corporate tax rates from 35 to 25% and bring individual tax rates down to a maximum top rate of 25%.

Reporter:         What is President Herman Cain’s solution for the national debt and our deficit?

Cain:                First, implement the kind of five-point plan that I talked about.  In the second two years of my first term, replace the entire tax code with the fair tax to supercharge this economy.  We can’t just stimulate the economy and sit back.  We have to establish an advantage on the rest of the world and the fair tax would give us that advantage.

I would require an across-the-board 10% cut in federal spending in every agency except defense.  The only reason I exclude defense is because the world is not safe.  You got all these nut cases out there, pipsqueak potentates, rattling their sabers so we’re going to cut defense.

I would restructure Social Security, Medicare, and Medicaid.  Trimming around the edges is not going to work.  For example, take Social Security.  The only thing that this administration and the previous administrations have done for the last several decades is decrease benefits, raise the retirement age, or increase taxes.  How about restructuring it using personal retirement accounts?  I didn’t say privatization.  The country of Chile did it 30 years ago.  They don’t have a Social Security problem anymore.  Every worker has an individual personal retirement account.  We can get to the same point if we stop demagoguing and saying it’s going to privatize Social Security, it’s going to hurt old people, children, and puppy dogs.

Reporter:         How much do you think race would play a role in your candidacy and how much has Barack Obama opened the door for a black president?

Cain:                Zero.  I think color is off the table whether I run or not.  I’m an American black conservative.  That’s how I describe myself.  Is there an element in this country that’s thinking, “Well, we elected this black guy and he was a dud.  Do we elect another one?”  I think maybe a thimbleful of people think that way, but that’s very narrow.  I think most of the people are looking at content and character.  Did Barack Obama open the door for me because I’m Black?  No.  The door was already open.  He just happened to get through it first.

Cain:                President Cain would propose that as a very viable option.  The Republican National Committee obviously would have to make the decision, but I would absolutely not be opposed to holding a Republican National Convention here in Las Vegas.  In case you all haven’t figured out, this is one of my favorite places.  The misperception some people have is that Las Vegas is all about gambling and illicit activity.  Las Vegas is about entertainment!  I watched Las Vegas make the transition from mediocre restaurants to exceptional restaurants.  Las Vegas has mastered the art of entertainment, and gaming is only one part of that that they have mastered.  My wife and I come here a lot.  Whenever we want to take a short trip, we come to Las Vegas.

Trust me.  If my re-election convention was to be held in Vegas I’d be the first one trying to influence…

Reporter:         This could be your Western White House couldn’t it?