Orlando Sentinal Staff Classic Example of Why Newspapers Are Failing 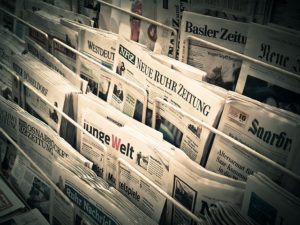 The other day, the Orlando Sentinel printed an editorial saying that it would not endorse President Trump in 2020.

It was signed by the “editorial board” of the newspaper which really means it was written by a guy named Mike Lafferty, whoever the hell he is.

Now here’s the difference between a clown like that and people like me and the folks you see printed in this publication.

We sign our names to what we think.  We don’t hide behind anything.

Lafferty masquerades as the “institutional voice of the Orlando Sentinel”.  His own words.

Now, first of all, it’s not like this newspaper is particularly relevant.  It’s owned by the Tribune Publishing Company— as in the Chicago Tribune.  That sound you hear is Colonel Robert McCormick turning over slowly in his grave.

The Orlando newspaper has no particular right to an “institutional” voice.  Truth be told, who in Orlando gives a flip what some clown behind a computer thinks?

The paper is run by the same kind of people who populate failing publications everywhere these days and I have to wonder if the internet is as big a factor in that failing as is their baked-in liberalism.

Walk through most newsrooms these days and you’ll meet people who just KNOW what politicians are doing wrong but have absolutely no first hand knowledge of the real world or how it works.  They believe the idiot “polls” that they and their competitors churn out despite the fact that they are wrong more often than not because the same thing they hold responsible for killing newspapers—progress—has made it very difficult to get a sample.  They think Twitter is news.  They think Facebook is news.  Hell, some of them think their bowl movements are news.

And they have the nerve to tell us—unsigned—who THEY endorse?

Here’s an idea:  Go outside and find some real news.  You know, who, what, when where and, when you actually know something, why.

Or, even better, if you’re so smart, show us.  To quote Teddy Roosevelt, “It is not the critic who counts; not the man who points out how the strong man stumbles, or where the doer of deeds could have done them better. The credit belongs to the man who is actually in the arena, whose face is marred by dust and sweat and blood; who strives valiantly; who errs, who comes short again and again, because there is no effort without error and shortcoming; but who does actually strive to do the deeds; who knows great enthusiasms, the great devotions; who spends himself in a worthy cause; who at the best knows in the end the triumph of high achievement, and who at the worst, if he fails, at least fails while daring greatly, so that his place shall never be with those cold and timid souls who neither know victory nor defeat.”

Most if not all of the people you will read here have been in that arena.  That’s why we are NOT afraid to sign our names.