And the rest of the 2020 Democrat clown show thinks that 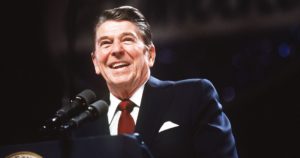 Let me tell you a story about a chance meeting I had the other day at a Reno, Nevada Jiffy Lube.

I took my daily driver—a 1994 Ford Explorer with about 350,000 miles (there’s a reason Ford has been making vehicles for 115 years)—to have the air conditioner worked on.  Reno had hit 90 degrees the day before.

The guy sitting next to me in the waiting room heard me on the cell phone to one of my business associates and asked what I did for a living.

I replied that I was the CEO of USA Radio Networks and he asked what station we had in the area.  I replied KNNR, 1400 AM.  He replied, ahhh…Wayne Allyn Root’s station. (Also the Vegas Golden Knights’ station.)

Then another guy in the waiting room chimed in.  Said he watched Root on Newsmax and didn’t know that the whole show (which we syndicate) was available in Reno.  (We simulcast the 5-6pm hour with Newsmax, Wayne airs from 3-6pm Pacific.)

Then, the conversation turned to the media, President Trump and the Democrat clown show as these conversations often do. (I have a lot of them, wherever I go, it’s a blessing I inherited from my late father.)

Folks, this was an unsolicited conversation in a flyover town which is usually considered a 50-50 split between hardcore conservatives and environmental liberals.  A Jiffy Lube waiting room hardly tilts left or right.  It’s composed of people getting their cars worked on—as American as it gets in a general sort of way.

Yet, as our 30 minutes of conversation went on, there was no debating anyone in the room.  Nobody in that room was against the President.

It was exactly like my friends in farm and ranch country.

When I talk to farmers where I grew up in the Midwest (mostly corn and beans), they acknowledge that the President’s tariff and threats of tariffs have hurt them a bit.  BUT!  They are with the President because they can see beyond the tips of their noses.

It is the same with most—or all—of my rancher friends.

Put as bluntly as I know how, this is not a President who has no support.  He has support in places the Democrats (and their friends in the media) have no idea about.

There are people who have never been west of the Hudson River who seem to think that this President is not in the mainstream of American thought.

There are people who have never been east of the Los Angeles County line who think the same thing.

Unless things change radically before November of 2020, boy, are they in for a surprise.

The very same lamo media which spends 90 percent of its time attacking this President did the same thing in the first four years of Ronald Reagan’s term.  They have a very short memory of that today.  Especially after Reagan won 49 states in the 1984 election.

He was called a third rate actor and that was some of the nicest stuff.  Even faux conservative George Will said things about Americans being “taxophobic” and Reagan’s “Morning in America goo.”  Reagan got the same crap that President Trump gets, the difference being that there was no Fox News and newspapers, today, are dying—we suspect at least partially because of their baked-in liberalism.

I’m not predicting a 49 state Trump win in 2020.  But then, who predicted that Toronto would win the NBA championship and St. Louis would win Lord Stanley’s Cup?  Certainly not the experts.

And before you listen to those “experts” talk about their “polls”, remember that these were the same shameless clowns who had Hillary beating Trump by 7 points ON ELECTION DAY!