Our Political Has Self-Cleaning Banks, Just like the Daytona Speedway

Our Political Has Self-Cleaning Banks, Just like the Daytona Speedway
Jay Chauhan

Whatever happens on November 6, one thing is (almost) certain.

The Daytona 500, also known as the Great American Race, will be held next February. 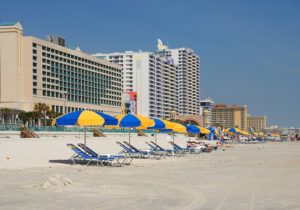 Now before you run, howling, to your keyboards to tell me how dare I trivialize the most important election in our times, let me continue a few paragraphs with what I have to say. Every election cycle, about this time, someone tells me that the end of the Republic is nigh if so and so wins and I have to sit them down and tell them that the American political system has something in common with the Daytona International Speedway—self cleaning banks.

For those of you who are not even casual NASCAR fans, the Daytona International Speedway—and, by the way, big Bill France DID build that—is banked so sharply that when there is a wreck, the cars tend to slide down into the infield, hence the term “self cleaning banks.”

America declared its independence on July 4, 1776. We were the product of a revolution fomented by 56 angry white guys, one of whom signed his name so big that the British King could see it without his glasses. (I have come to an age where I understand that.)

We are a great, but have never been a perfect, nation and we struggled for a fairly long time after the revolution to find a formula which worked for the long haul. Our founding fathers found that formula in a form of gridlock. Much of the genius in the Constitution is that our founding fathers came up with a three pronged solution which does not allow anybody to drive the nation too far, too quickly. That formula has allowed an otherwise imperfect nation, filled with the likes of, well, us, and our ancestors, to survive as the longest lived experiment in self-government in history for 242 years.

In short, our political system has developed self-cleaning banks. Push us too far in one direction, get us into a wreck and the system has the capacity to right itself.

It’s not a perfect system. An incompetent socialist can get himself elected President. Ask Barack Obama. People who probably shouldn’t be able to, can have an inordinate sway over public policy. But, at the end of the day, the average voter can march to the polls and set things back on the right path. Ask Donald Trump.

And if you don’t think each and every vote counts, it was probably a bunch of NASCAR fans in Volusia County, Florida, home of the Daytona International Speedway, who cast the deciding votes for George W. Bush in 2000.

That was true in the mid 1860s when he said it and it is even truer today in a world held together by instant communication.

So, if you’re still with me, what I am trying to say is that if the Democrat Party were to win BOTH the House and the Senate, the Republic will survive.

The Daytona 500 will run next February, after the Super Bowl is decided.

Congress will convene; the Supreme Court will hear and decide cases, and, given a solidified Conservative majority on the Court, it’ll be a great show.

Like Daytona, our system won’t stop the big wreck from happening, but it will protect us against the larger effects. Presidents—whoever they are—are temporary. So are Congressmen and Senators.

Now this should not by any means be construed as any kind of a suggestion that there is some kind of a blue wave coming.  I don’t believe that to be the case.  I’m only trying to put this election in perspective. It is one which we have every two years. Every two years, some self-important oaf in the media will tell you that this is the most important election in our times. The truth is it is the most important election being held that day. This nation has survived a lot worse than Nancy Pelosi and Chuck Schumer including a whole bunch of people who can tell us about black helicopters and not much about American history.

If you want to give this President the tools to continue with his agenda, as I do, vote.

It is the most affirmative action you can take. As long as you vote—win or lose—the Republic will survive. If you don’t vote, you forfeit your right to complain.