Our politicians are focused on fixing the wrong problem 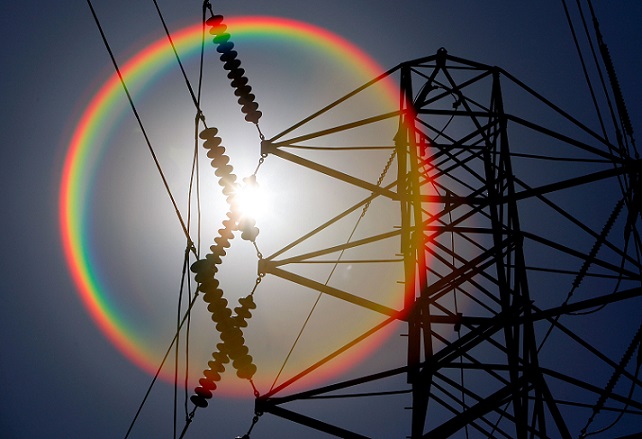 South San Francisco, CA – AUGUST 30: The sun shines over towers carrying electrical lines August 30, 2007 in South San Francisco, California. With temperatures over 100 degrees in many parts of the state, the California Independent System Operator, which manages most of the California electricity grid, is planning on declaring a minor power emergency later in the day, followed by a Stage 2 power alert during the late afternoon, indicating that power reserves have fallen below five percent. (Photo by Justin Sullivan/Getty Images)

(Thomas Mitchell) – “Climate change is the worst problem facing the world today. We have no more important issue in the world than this issue, period,” Nevada senior Sen. Harry Reid once said on the floor of the Senate.

At one of Reid’s clean energy confabs, Democratic presidential contender Hillary Clinton opined on climate change, “This is the most consequential, urgent, sweeping collection of challenges we face as a nation and a world.”

During a commencement speech at the Coast Guard Academy this past week President Obama said “climate change constitutes a serious threat to global security, an immediate risk to our national security. And make no mistake, it will impact how our military defends our country. So we need to act and we need to act now.”

Stopping climate change is urgent. Protecting the nation’s power grid? Not so much.

What if the power grid melted down? The water would stop flowing. Fuel pumps at the corner gas station would not work. Banks would close. Communications would be interrupted. No refrigeration.

If the power remained off for months, it is estimated as much as 90 percent of the population of the U.S. might die from starvation, disease and social tumult.

There are a number of things that could actually cause such a scenario — terrorism, solar flare or an electromagnetic pulse (EMP) caused by the detonation of a relatively small nuclear bomb in the atmosphere.

A year ago the House of Representatives passed by unanimous voice vote H.R. 3410, which would begin the process of hardening the nation’s grid against both solar flares and mad-man-caused EMP. Nevada Rep. Joe Heck was a sponsor. It languished untouched, unnoticed, ignored by the then-Reid-run Senate.

The cost to do this grid work has been placed at somewhere between a half a billion dollars and a couple of billion. Washington spends three times that in one minute.

Rep. Trent Franks, R.-Ariz., who introduced H.R. 3410 said, “It strikes at my very core when I think of the men, women, and children in cities and rural towns across America with a possibility of no access to food, water, or transportation. In a matter of weeks or months at most, a worst-case scenario could bring devastation beyond imagination.”

Writing in The Wall Street Journal recently, Henry Cooper, former director of the Strategic Defense Initiative, and Peter Pry, executive director of the EMP Task Force on National and Homeland Security, pointed out the megalomaniacs who run North Korea and Iran are both probably capable of and likely willing to order such a devastating strike.

They report that the headquarters for the North American Aerospace Defense Command is being moved back into Cheyenne Mountain near Colorado Springs, because of the EMP threat.

Also, the nation’s defenses are still pointed toward a Cold War enemy only capable of striking from the north, while our southern flank is completely exposed. Pry and Cooper report that both North Korea and Iran have put satellites into orbit over the South Pole — trajectories “that appear to practice evading U.S. missile defenses, and at optimum altitudes to make a surprise EMP attack.”

Secretary of State John Kerry recently called the North Korean government “one of the most egregious examples of reckless disregard for human rights and human beings anywhere on the planet.” This was shortly after Kim Jong Un reportedly had his defense minister executed by an anti-aircraft gun after he fell asleep during a meeting.

According to Pry a recently translated Iranian military textbook endorses the concept of a nuclear EMP attack against the U.S.

While U.S. senators sit on their collective arses and twiddle their thumbs, several states are looking into ways to harden their intrastate grids, say Cooper and Pry. These include Maine,Virginia, Florida, Colorado, Texas, North Carolina, South Carolina, Indiana, Idaho and New York.

Perhaps, the Nevada Public Utilities Commission could pick up the slack. After all, one of its duties by law is to “provide for the safe, economic, efficient, prudent and reliable operation and service of public utilities.” All it would have to do is tell Warren Buffett and the other utility owners to spend the money to harden the grid and then reap a 10 percent return on equity from ratepayers.

Perhaps someone will look into this once the urgent problem of climate change is addressed.