Paul Supporters Inject Themselves Into Nye and Douglas GOP Conventions 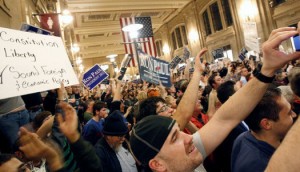 (Lori Piotrowski) – Reports from around the country are showing that Ron Paul supporters are unhappy with the poor showing of their presidential candidate in the nationwide primary and caucus season. Although candidate Paul has the fewest number of delegates, his supporters are showing themselves to be much more forceful in ensuring their voices are heard.

In early March, Clark County held its GOP convention, and Ron Paul supporters turned out in force. The same has happened throughout the U.S. (Ron Paul Supporters “Hijack” Delegate Conventions is but one of the many articles you’ll find on search engines.)

From a pro-Paul Web site, Ron Paul Nevada Team Continues Winning Streak In GOP County Conventions gives one view of the result of the most recent Nevada county conventions, Nye and Douglas. The report conflicts with views from many others who attended the conventions, that is, those who are non-Paul supporters, who are flooding cyberspace with their countering views of the events and calling on the Interim Party Chair, James Smack, to null the convention results.

One attendee called for the convention to be declared null because of illegitimate seating of delegates:

I was duly and legally appointed by the Nye County Republican Central Committee Chair to fill a vacancy in the Precinct in which I live. I was entitled to be seated.  Instead, I was harassed, threatened, thrown off the Central Committee and told to leave.

I attended the convention in Tonopah on Saturday as an appointed alternate delegate.  At the convention, I was moved up to a delegate because many elected delegates did not show.  I am no lawyer, but I read Nevada law to say that the board can seat delegates at the convention to fill vacancies in order to create a quorum according to residency requirements.

The convention opened at approximately 9:20 AM.  What followed was a show of disgusting, unruly, unprofessional behavior on the part of Ron Paul delegates.

In short, without the convention being convened, they disrupted the credentials seating of delegates until 2 PM.  Continuing to disrespect the county chair person and the parliamentarian and the members of the county committee,  they demanded a vote to  unseat the alternate delegates they did not want (all non-supporters of Ron Paul).

They then voted to unseat all alternate delegates they did not want still outside the convention being convened.  At this point, most alternates and many delegates left in disgust.

With alternates not seated and other delegates leaving, this convention no longer had a quorum.  That did not stop Ron Paul supporters.  They convened the convention, replaced the sitting chair person and staff, and proceeded to run their own convention , adopting their own rules, and electing a huge majority of Ron Paul delegates to the state convention.

Other attendees also experienced issues with the seating of delegates:

For the first time, I am participating in the delegate process. I attended the convention in Tonopah on Saturday as an appointed alternate delegate.  At the convention, I was moved up to a delegate because many elected delegates did not show. The Captain for my precinct said I could not be part of the process because I was not on his list. His list had only Ron Paul supporters; if I had not contacted others that were listed as delegates they would not have come to Tonopah.

A couple new to Pahrump, yet long-time Republicans, wrote to express their dismay at the convention credentialing process:

We registered for the Convention as alternates, waiting to see if we were needed. Our precinct need three additional delegates, and we were called to be seated…

Finally the precincts started making motions not to recognize any of the appointed alternates. This was seconded and voted on, 77 for and 75 against. This action took place before credentialing was completed. The appointed delegates weren’t allowed to vote.