(Robert Fellner, NPRI) The debt held by the Public Employees’ Retirement System of Nevada (PERS) will explode over the next decade — rising from $11.4 billion to over $38 billion — if the investment forecast of the system’s consultant is accurate, according to a just-released analysis by the Nevada Policy Research Institute. 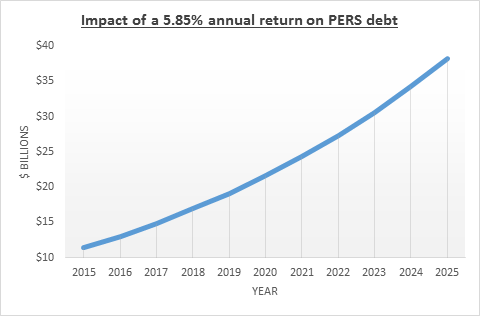 The resulting increase in retirement costs — already at all-time highs and consuming over 12 percent of combined tax revenue statewide — would mean lower wages for government workers as well as severe reductions in basic public services, according to NPRI Director of Transparency Research Robert Fellner.

“Without change, we can expect cuts to public safety as well as higher taxes and decaying roads,” he said.

“While our neighboring states have either already enacted pension reform or are actively seeking out solutions,” charged Fellner, “Nevada’s PERS board seems content to gamble with the retirement security of the system’s members, relying on investment-return projections even higher than Warren Buffett expects to get!”

PERS is now so dependent on investment returns that even just a single year of flat performance would increase its shortfall by roughly $3.6 billion — more than what Nevada spent on libraries, parks and recreation, police and fire protection and highways combined in 2013.

If PERS board members miss their investment target by as much as their hand-picked advisor forecasts, it’s unlikely that Nevada taxes can be hiked enough and public services cut enough to make PERS solvent.

In that situation, no other choice would remain but to cut benefits promised to retirees.

The consultant retained by the PERS board, Wilshire Associates, provides customized consulting and investment services to public and corporate clients. PERS received the Wilshire report 13 months ago but never published it on the system’s website, nor acted on its recommendations.

Instead the report was dismissed as being of “no real urgency” by a PERS official when pressed for answers by Ruben Murillo, president of the Nevada State Education Association.

Fellner believes that PERS must do more to be transparent.

“As a public agency, PERS is accountable to the people of Nevada who deserve to have complete information regarding the health of the system,” said Fellner.

“Last year, government workers and employers spent over half a billion dollars just on PERS debt.

“This pension tax has already negatively affected teacher recruitment and is the driving force behind the call for higher taxes statewide. Reflexively defending the status quo is profoundly unfair to both government workers and taxpayers — who are forced to pay the full cost of PERS mistakes.”