Phyllis Schlafly: My Remembrance of a Conservative Giant

Phyllis Schlafly: My Remembrance of a Conservative Giant
N&V Staff 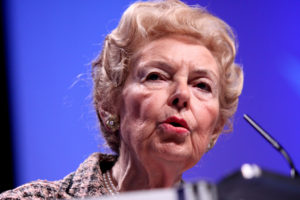 ( Richard Viguerie) My longtime friend Phyllis Schlafly, who died yesterday at age 92, was one of the most influential conservatives who never held public office.

Mrs. Schlafly, known to her many friends and admirers as the First Lady of the Conservative Movement, she wrote some twenty books and her Eagle Forum issued hundreds of reports and monographs.

However, it was her 1964 book, A Choice Not An Echo, written to promote the insurgent conservative candidacy of Senator Barry Goldwater, that became one of the seminal works of the modern conservative movement, and updated in a new Fiftieth Anniversary Edition, it is still in print today.

Phyllis paid her way through college by working in a World War II ammunition plant and later, while rearing her six children, she obtained her law degree.

While perhaps most widely known for her opposition to the Equal Rights Amendment, and the successful national campaign to stop its passage, through her books and columns Phyllis Schlafly led the conservative movement in the cultural, economic, judicial, national security arenas and in Republican Party organizing – she was the complete package, a true Renaissance Woman.