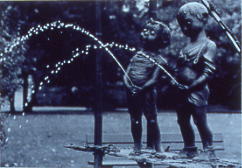 Nevada Assemblyman Ira Hansen (R-Reno) inked an op/ed that was published by the Reno Gazette-Journal in which he maintains that Republicans who voted for that $600 million tax hike as part of the budget deal last month “did the right thing;” that Assembly Republicans who voted for the $600 million tax hike “were in fact that ones who acted fiscally conservative.”

This, boys and girls, is a textbook example of someone urinating down your leg and telling you it’s raining.

Unlike his GOP legislative colleagues, Hansen is an experienced columnist and a former talk show host, making him an accomplished communicator. But you can’t put lipstick on this pig….and all the king’s horse and all the king’s men can’t make this humpty-dumpty budget bargain a “win” for fiscal conservatives.

Despite holding himself out to be a conservative hawk on taxes, Ira said from Day One that he was open to supporting higher taxes to fund “essential state services.”

But that’s a pretty huge and subjective loophole. Indeed, it’s the exact same sort of thing former Sen. Bill Raggio used to say about the Nevada Arts Council. Which means defining “essential” is kinda like Bill Clinton defining with “is” is. You can make it mean whatever you want it to mean.

In the end, Gov. Sandoval reversed his own unequivocal verbal pledge not to extend the $600 million worth of sunsets….and four Republican state senators and ten Republican state assemblyman, including Assemblyman Hansen, went along with him. As such, all have been understandably and deservedly criticized by fiscal conservatives.

Which leads us to Ira’s column. Here’s the key excerpt:

“Some strong criticism has been leveled at those who voted to sustain Gov. Brian Sandoval’s final budget. To some Republicans, we have left the faith; we are not ‘fiscal conservatives.’ Yet the evidence shows the opposite. Unless borrowing is now the litmus test to be a fiscal conservative, we who supported Sandoval did the right thing. . . . (The) budget called for borrowing – or using the more politically correct term, ‘sweeping’ – $192 million from next biennium’s insurance premium tax revenue and $425 million from the Washoe and Clark county school district bond reserve accounts.”

Irresponsible borrowing certainly is NOT a sign of fiscal conservatism…and no one has claimed that it is. Indeed, borrowing is how the federal budget has gotten so out-of-control. But that’s not exactly what we’re talking about here. What the governor’s original budget proposed doing was to use surplus tax revenue which had been set aside in case of an emergency from the school district bond reserve accounts.

Now, one can argue whether or not using that local tax money to fund state programs was a good and proper thing to do, but to portray it as Nevada going to Wells Fargo and asking for a loan to keep the DMV running is disingenuous at best.

That said, here’s what Assemblyman Hansen intentionally neglected to tell everyone about that $425 billion sweep: It wasn’t necessary. As it turns out, the Economic Forum in early May projected that Nevada’s tax revenue for the next two years would be about $400 million higher than anticipated. So Hansen and Sandoval could have used that “found” surplus money to replace the “swept” money.

The bottom line is that whether you call it “borrowing” or “sweeping,” neither the governor nor Assemblyman Hansen needed to do either. They just needed to resist the urge to spend that $400 million surplus that was burning a hole in their pockets.

As for the other $192 million “borrowed” from the insurance premium tax, that, too, could have/should have been covered by spending cuts, not tax increases. That would have been the “fiscally conservative” thing to do. But instead, Ira complains that his conservative GOP colleagues didn’t offer up an alternative budget that didn’t include “borrowing.”

Ira’s the one now saying he didn’t support the “borrowing.” If true and as such, it was incumbent upon HIM to offer up an alternate budget that was balanced without “borrowing” – meaning it was up to him to propose either additional spending cuts or tax hikes.

Did he? No. Apparently Ira was for borrowing before he was against it.

Ira also writes that “the final (budget) outcome was very good, with total state spending reduced by half a billion dollars and no new taxes.”

The half a billion in reduced spending was actually reduced by the last Legislature during the 2010 special session. And what they were forced to reduce amounted to the amount of one-time “stimulus” money the Legislature wasted in 2009.

And no matter how many times Ira and his fellow GOP tax-hikers say black is white, black is black and extending the $600 million worth of sunsets was a $600 million tax hike.

Assemblyman Hansen concluded his column thusly: “Anyone who listened to me during my radio show days or read the column I wrote for over 16 years knows I am a true conservative….”

Ah, yes. But talk is cheap. The true test is whether you walk the walk. And in this case, there were only six true, principled conservatives in the Assembly who said “no” to Gov. Sandoval’s tax-hike budget. Ira Hansen, regrettably, wasn’t one of them.

So please, Assemblyman, stop tinkling on our legs.