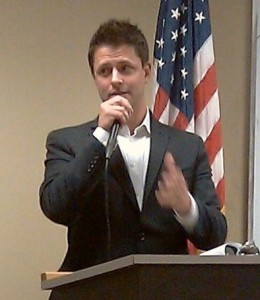 (Ryan Hamilton) – Adam Stryker is the current executive director of Nevada’s chapter of Americans for Prosperity.  Adam attended Creighton University in Nebraska, where, presumably, he learned how to throw a punch.  Here’s what he had to say about culture and politics in Nevada.

Nevada News & Views: What is the best place in Las Vegas to get a cheeseburger?

NN&V: If you’re going out – you know, to have a good time – what song(s) do you listen put on to get you in the mood to socialize?

Stryker: I have a very random and eclectic mix of music on my iPod.  I like country a lot and some old school 80’s tunes are always fun.  But two songs come to mind that people might say I play too much, that would be Journey’s “Don’t stop believing” and Nelly’s “I am Number 1,” like I said – random.

NN&V: Tell us the funniest joke you know.

Stryker: I’m not so big on jokes, but I am a fan of funny YouTube videos, and this one is pretty good: http://www.youtube.com/watch?v=nGeKSiCQkPw

NN&V: Are there any special Stryker family traditions for Thanksgiving?

Stryker: Well my in-laws, the Bennetts, make the most delicious Honey-baked ham as part of Thanksgiving dinner.  But the tradition comes the next morning when we get together with all of the family again and take the left-over ham that has been soaking all night and James (my father-in-law) makes Eggs Bennett – his twist on eggs benedict.  It’s awesome!

NN&V: What’s the most important thing the average Nevadan should know about Americans for Prosperity?

Stryker: That we are a nonpartisan organization.

NN&V: Do you prefer downtown or the strip?

Stryker: I think that both locations have their draw.  Our new office is located kind of in-between downtown and the strip, I think that you can call it the Arts District, and I have begun to discover so many cool places, restaurants, bars, shops in this area.  When you go down to the strip, you know what you are going to get.  But downtown is always evolving and changing so I think they are both great.  Las Vegas is the best city in the world, no doubt.

NN&V: You get to box anyone in history.  Who do you pick and why?  What do you put your odds of winning at?

Stryker: I would like to box Bob Fulkerson (Progressive Leadership Alliance of Nevada’s director) and I would guarantee victory.  I think it would be fun to do a charity-boxing match pitting liberals against conservatives.  We could have Chuck Muth box Jon Ralston, Danny Thompson versus Michael Roberson, Geoff Lawrence versus Jeremy Aguerro.  All in good fun, of course ,and all the money could go to a good cause.  The bottom line is that Nevada’s in a bad way, as we all know, and I think a little collegiality amongst differing schools of thought might lead to some real solutions for the future of our State.

NN&V: What’s the one issue you think Nevadans should pay special attention to as during the lead up to the caucuses?

Stryker: People need to pay very close attention to the proposals that individual candidates are offering to get our economy back on track.  Herman Cain has proposed his 9-9-9 plan, a very interesting and appealing proposal, but we don’t know whether that will pencil out financially.  Mitt Romney was in Las Vegas rolling out his “Believe in America” plan just a couple weeks back – a 160-page proposal for moving our Country in the right direction.  Jon Huntsman has proposed the “Time to compete and American jobs Plan.”  Rick Perry has yet to deliver his plan, but I am sure he will have something out before too long. I think that Nevadans need to take all of these proposals seriously, read up on them and be educated when we caucus on February 18.

“Pop Quiz” is a regular feature of Nevada News and Views, providing a more personal look at political figures, public policy officials and other movers-and-shakers.  We’ll be asking the tough questions about music, art, pop culture, and life.  After all, when they’re done with casting the important votes and organizing support, our leaders are still people.