(Newt Gingrich) – Callista and I were honored to be guests of Speaker John Boehner yesterday when Israeli Prime Minister Benjamin Netanyahu addressed a joint meeting of the House and Senate. 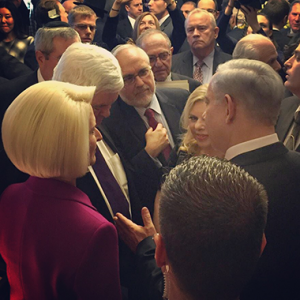 After a lot of talk by some Democrats about boycotting the speech, the House chamber was packed. Some 55 House Democrats had announced they were skipping the speech and Republicans decided there wouldn’t be any vacancies. The Speaker’s guests traditionally sit on the Democratic side of the House, and we had a birds-eye view of House Republicans wandering over to sit on the Democratic side. Since there are fewer seats on the floor than House members (and since a joint meeting also involves the Senate and assorted diplomats), it was not a problem.

Prime Minister Netanyahu filled every seat on the floor, every seat in the gallery and several overflow rooms. The crowd was expanded by the fact that his visit coincided with the annual meeting of AIPAC, the American Israel Public Affairs Committee.

Talking with AIPAC members gave some indication how much President Obama had helped build the audience for the Israeli Prime Minister’s speech. Not only was this the largest AIPAC meeting in history (more than 15,400 registered) but more than 2,000 new people had registered after President Obama complained about Speaker Boehner inviting the Israeli Prime Minister to speak.

President Obama and his White House team deserve a lot of credit for making this speech a event than it would normally have been–both in the chamber and for viewers around the world.

If the President had cheerfully served coffee for Netanyahu and welcomed him to the United States as one of our strongest allies, there would have been dramatically less interest in the speech. 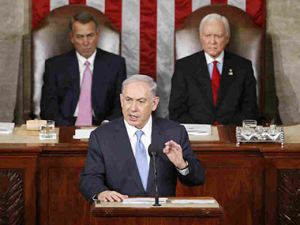 By attacking both Boehner and Netanyahu, however–making clear how angry the President was that a prime minister would come without presidential permission–Obama elevated the speech into an historic event.

The Democrats who announced they weren’t going to the speech further raised interest in the Prime Minister’s message. People reasoned that if what he was going to say was this controversial, maybe it was worth listening to.

Everyone who was worried about President Obama’s weakness in foreign policy, of course, was eager to hear Netanyahu’s case already.

The Prime Minister’s entrance into the House Chamber was exactly like a State of the Union. Members had lined up to greet him as he walked down the central aisle. He was stopped again and again by members who wanted him to know that they were on his side.

The speech itself was strong and clear.

He expressed his country’s fear of a nuclear-armed Iran forcefully and vividly.

This justified fear of Iran is deep and goes back a generation.

When I became Speaker after the 1994 election, my first foreign visitor was Yitzhak Rabin, then the prime minister of Israel. He came to explain that Israel could handle any threat from the Palestinians but that Iran was simply too big. Eight million people live in Israel today, compared with 78 million in Iran.

Prime Minister Netanyahu came to Washington to repeat a warning that every Israeli Prime Minister has expressed for a quarter century.

His speech is worth watching, reading, and thinking about.

At the end of this historic event, skeptics of the deal President Obama is apparently “begging” for with Iran were unified in opposing a weak or bad agreement.

President Obama deserves a lot of credit for drawing maximum attention to the event and ensuring that many more people heard Prime Minister Netanyahu’s message. It was an important message.

And Speaker John Boehner deserves a lot of credit for leading by inviting the greatest advocate of a strong stand against Iran to address a joint meeting of Congress.