Primaries Not the Solution for Caucus Chaos, Bring Back Smoke-Filled Backrooms

Primaries Not the Solution for Caucus Chaos, Bring Back Smoke-Filled Backrooms
N&V Staff 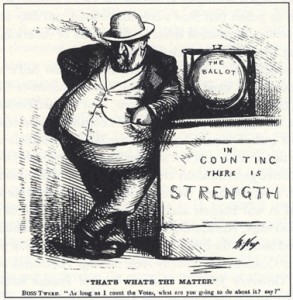 (Thomas Mitchell/4THST8) — The Republican presidential caucus on Saturday wasn’t exactly a well-oiled machine. There were long delays, breakdowns in communication, misfires and miscues.

In fact, 20 minutes into it I sent out a tweet or twit or whatever saying: “GOP organization — an oxymoron.”

As sure as worms after a rainstorm and just as there was in 2008 a bunch of people are wringing their hands and bemoaning the unseemliness and the rough-hewn nature of it all — people actually talking to each other about politics, poor turnout, delayed vote count results, etc., endless freaking out etc. They are saying, again, the raucous caucus should be replaced with a nice aseptic primary in which state paid bureaucrats and septuagenarian volunteers man the polls for 12 hours and the voters hide behind curtains to choose their party standard bearer.

The key word is: Party. The various political parties are, or should be, private organizations of people with like-minded interests. The parties should not be tools of the state nor recipients of state funds or in-kind services.

In fact, it should be unconstitutional for the state to even conduct primary elections for the two major parties. We don’t do it for the minor ones. The system locks in the power and influence of the two major parties and gives the appearance the minor parties are of no significance. Political parties should be like living organisms, allowed to live or die or be overthrown on the basis of their own merits and replaced in the power structure if necessary.

If any political party wishes to throw a primary, let it. Pay for it themselves. Conduct it themselves. Figure out how to prevent cheating or let the dead vote. It is no never mind to anyone but the members of the party.

Especially galling was the liberal columnist who kept blathering about the need for the Republicans to conduct a nice, clean, pristine primary while repeatedly using the personal pronoun “we.”

The left-wing Las Vegas Sun quoted uberliberal state Sen. Sheila Leslie, a Reno Democrat, making an on-point observation about how much of the grousing now is from anti-government Republicans. “I find it very ironic that the very same people who complain government is not efficient at running anything now want government to take over the presidential choice.”

In 2008 it was Democrat Dina Titus who promised to introduce a bill to conduct presidential primaries in Nevada. “This notion of neighbors getting together with neighbors to talk about politics, that’s just not Nevada,” she said. “What I found in my caucus is that the meeting didn’t lead to collaboration, cooperation and a good discussion. It led to hostility. It’s too complicated.” And she’s a professor of political science — another oxymoron.

I used that quote in a column in which I talked about Columbia School of Law professor and election law expert Nathaniel Persily saying, “The move toward primaries has transferred power away from political parties to the media, who are then in a position to describe someone as having momentum.” I agreed.

Actually, the caucuses had all the high-minded polemic firepower of a junior high pep rally. At one Democratic caucus in 2008 I observed one group was chanting “Hill-ar-y, Hill-ar-y” while stomping their feet on the bleachers in time to the chant. Another countered with a totally vapid chant of “Yes, we can. Yes, we can.”

Well, yes, you sure did. Now someone needs to clean it up.

But what really set people off now and back in 2008 was actually having to talk with others. One newspaper letter writer wrote four years ago, “Whoever came up with this idiotic idea should be shot. Meanwhile, let’s change our way to selecting candidates to a civilized format, with every eligible voter being able to make his/her selection in private and in secret …”

The television era and the state-run primaries have turned politics into little more than a really high-stakes version of “American Idle.” Yes, I mean idle. Voters texting from their armchairs for the best quip or against the worst gaffe of the evening debates.

National conventions used to be hard fought battles for the soul of the parties. Now by the time the convention arrives, it is all over but the shouting. They are all pom-poms and confetti and giant flags and Grecian columns in coliseums. One long infomercial.

It is time to scrap the idea of primaries and even caucuses. Let’s bring back smoke-filled backrooms where ward heelers arm wrestle and cajole and make deals with the Devil, or a even a Democrat, if that’s what it takes to win.

Maybe then we would get candidates who stand for principles instead of hollow platitudes and slogans appealing to the widest possible range of buffoons and slack-jawed dullards.

But for heavens sake stop letting the state dictate how the parties choose their candidates and listening to the whiners too afraid to sully their shirtsleeves in an honest tussle. Politics should not be a beauty pageant open to all comers praying for world peace.

Maybe I’ll start my own party and call it something catchy, like the Anti-Federalists or the Curmudgocrats. Only like-minded folk may join, which means we’ll meet in a phone booth, if we can find one. But we’ll take money from anyone. Super PACs, individuals, corporations. Our candidate will sport more logos than a NASCAR driver.

Better yet, take the advice of Thomas Jefferson, who said in 1789:

“I have never submitted the whole system of my opinions to the creed of any party of men whatever in religion, in philosophy, in politics, or in anything else where I am capable of thinking for myself. Such an addiction is the last degradation of a free and moral agent. If I could not go to heaven but with a party, I would not go there at all.”