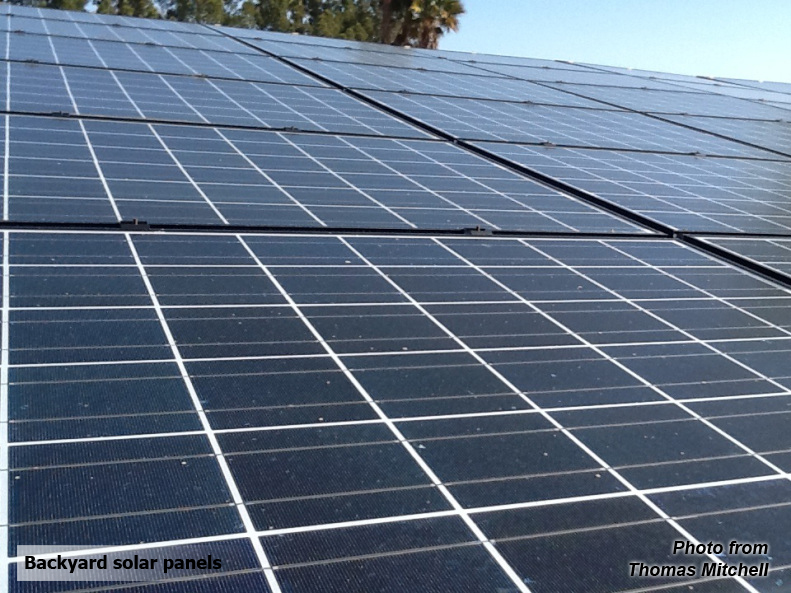 Buried in the morning newspaper story today about rooftop solar panels hitting the peak capacity allowed under law was a brief mention that the Public Utilities Commission staff is proposing abrogating current contracts with homeowners who already have solar panels.

“The staff recommendation would bring all net metering customers, including those in the current program, under the new rate structure,” the story states.

Net metering is basically a system by which home solar panels that generate more power than the home is using upload power to the grid and get those kilowatt-hours deducted from the monthly bill at whatever the current retail rate is.

Though the story does not spell out what that means, an earlier story notes that NV Energy has proposed that future rooftop solar panel customers would get credited for so-called “returned” power at a rate of only 5.5 cents per kWh instead of the current 11.6 cents.

Applying this proposal retroactively to current solar panel owners would cause their power bills to increase and make the length of time for them to realize a return on their investment even longer.

Rooftop solar panel companies have argued that the NV Energy net metering proposal could mean that any new solar panel installations might never realize a positive return on investment, and this could put them out of business and end 6,000 jobs.

Yes, several years ago I installed solar panels in my backyard. The NV Energy rebate program at the time paid for about half of the cost. I save money every month but have not yet reached the point where the savings cover my part of the installation cost. Without the rebate, it would never have penciled out. Without the full return power credit, it will take longer.

Would you enter into such a deal if one side could change the terms of the contract at any time arbitrarily?

Bryan Miller of Sunrun Inc., a solar panel installer, was quoted as saying, “It is outrageous and it is shameful. It should be completely disregarded.”

The PUC has a Dec. 31 deadline to set rates for new net metering installations and lift the cap on rooftop solar panels as allowed by Senate Bill 374.

What makes this all doubly confounding is that state taxpayers shelled out $1.2 million two years ago to attract rooftop solar panel installer SolarCity to open in Nevada and compete with current panel installers.