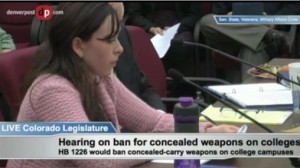 (Chuck Muth) – Amanda Collins – a young Reno woman who survived a rape attack in a UNR parking garage in 2007 and has led efforts to pass a “campus carry” law in Nevada – is now being attacked by liberals for daring to speak out about it.

In response, she’s been accused by liberal bloggers of being “duped” into writing the letter and criticized for “exploiting” her attack to raise money for Hutchison’s GOP opponent, Sue Lowden. One liberal blogger wrote that “Collins, either willingly or unwittingly, is being used by Lowden” and characterized Amanda’s letter as “borderline rape-porn.”

As for the condemnation made by another liberal blogger of the “sickening exploitation” of Collins’ ordeal, it is painfully clear that while all victims of tragedy are equal, some are more equal than others.

The fact is, the gun control crowd has been using James Brady’s tragic shooting in the assassination attempt on President Reagan to raise money for over 30 years.

Rep. Carolyn McCarthy used the tragedy of her husband’s death in a shooting on a New York commuter train to get elected to Congress and raise money for stronger gun control measures.

Former New York Mayor Michael Bloomberg has been using the Sandy Hook tragedy and other shootings to raise money for the Mayors Against Illegal Guns organization he co-founded which is promoting gun control measures.

Rep. Gabby Gifford’s husband used the Carson City IHOP tragedy last year in testimony before the Nevada Legislature in support of a very controversial bill on background checks while his Super PAC has “exploited” shooting tragedies to raise over $18 million to oppose candidates who don’t support gun control.

And here’s what the Newtown Action Alliance, a gun control group that sprang up after the Sandy Hook shooting, says on its website:

“Nobody understands the impact gun violence has on families and communities better than victims and family members, and nobody should be prevented from telling their compelling stories, or adding their powerful voices to the movement because of financial constraints. Your contribution of any amount helps to make it possible for them.”

So why is it OK for gun control advocates to tell their stories and raise money off of tragedies but it’s somehow “sickening exploitation” if gun rights advocates to do the same thing?