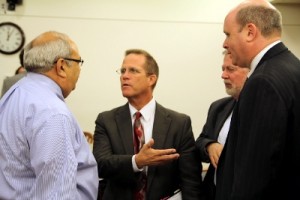 The much anticipated ruling from Judge James Todd Russell on guidelines for drawing those new districts will have major ramifications, however, for the state’s voters and its two major political parties.

The purpose of the hearing was to decide what factors a panel of three citizens must consider when drawing the state’s political lines for four congressional and 63 legislative seats based on the new population figures from the 2010 U.S. Census.

Attorneys for Democrats and Republicans used the terminology to make their cases for how the new political lines should be drawn. Most of the hearing focused on the four congressional seats that must be drawn for the 2012 general election. Nevada earned a 4th seat due to population gains over the past decade.

Time is of the essence in the dispute, with the election season set to get under way early next year.

Attorney Mark Hutchison, representing the Republican Party, argued that the Hispanic community in central Las Vegas should form the basis for one of the four congressional districts in any new redistricting plan.

Attorney Marc Elias, representing Democrats, argued that while communities of interest should be considered, there is no requirement in the federal Voting Rights Act that a predominantly Hispanic district be created.

After the hearing, Hutchison said: “The court is going to take care to make sure this process is fair and from the beginning that’s all the Republicans have wanted, for the process to be fair. We want to start with a level playing field and let the chips fall where they might. We’re just opposed to any sort of a partisan Democratic slant to this process and I think we got that today.”

Hutchison said he will not appeal Russell’s ruling on how the redistricting process should be carried out by the special masters.

Elias declined to say whether he would appeal Russell’s ruling on the guidelines for the special masters on how to draw the maps.

“I always take these things one step at a time,” he said. “I’m here today and I’m going to wait for the ruling.

The issue ended up in the courts when a bipartisan plan could not be hammered out between Democrats and Republicans in the 2011 legislative session.

The Democrat-controlled Legislature passed two redistricting plans, both of which were vetoed by GOP Gov. Brian Sandoval.

While not immediately ruling on the Hispanic congressional district question, Russell did announce some developments in his plan to resolve the dispute.

He announced that the special masters will hold two public hearings, one in Las Vegas on Oct. 10 in the Grant Sawyer State Office Building, and the other Oct. 11 in the Carson City legislative building, to take comment from interested parties on what Nevada’s new districts should look like.

Following those hearings, the special masters will have until Oct. 21 to submit new political maps to the court. Russell said he will then release their report and proposed maps to the public.

Russell said that by Nov. 15 or 16 he will decide whether to accept the maps as drawn by the special masters or send the issue back for any specific revisions he deems necessary.

Regardless of how he rules, the redistricting issue is expected to end up in front of the Nevada Supreme Court, and could be appealed into the federal court system as well.

Elias asked Russell to use Senate Bill 497, the second redistricting measure passed by Democrats but vetoed by Sandoval, as the starting point for the special masters to draw new districts.

Hutchison and other attorneys representing Republicans rejected the idea, saying the maps approved for the 2001 redistricting, along with the many sets of maps proposed this year by lawmakers and citizens, could all be considered by the special masters as a starting point.

“This is a perfect example of what I think the masters shouldn’t do,” he said.

But Elias warned that any effort to focus exclusively on creating one Hispanic congressional district could lead to “racial gerrymandering” which would put any plan approved by Russell at risk for a federal court challenge. It is not possible to draw a congressional district in Las Vegas that would have a majority of eligible Hispanic voters, he said.

There is also no evidence of block voting by white residents that has thwarted the efforts of Hispanics to elect candidates of their choice, Elias said, noting the election of Sandoval, who is Hispanic.

One of the experts cited by Republican as evidence of block voting by whites was the election of former state Sen. Bob Coffin to the Las Vegas City Council in Ward 3, defeating Hispanic candidate Adriana Martinez in the process, he said. But the expert failed to note that Coffin is of Hispanic heritage himself, Elias said.

“Nevada is not Mississippi,” he said. “There is no white block voting in Clark County.”

Attorneys also argued their positions on other issues, including whether two state Assembly districts should be drawn to fit exactly within each state Senate seat, a process called “nesting.”

They also argued whether “representational fairness”, or consideration of how many “safe” seats each political party should have, is appropriately before the special masters.

A number of prominent Democrats have either announced or are said to be interested in running for the Southern Nevada congressional seats even though the district lines have yet to be drawn. Already announced candidates include Assembly Speaker John Oceguera, former Rep. Dina Titus who lost to Rep. Joe Heck, R-Nev., in the 2010 election, state Sen. John Lee of North Las Vegas and state Sen. Ruben Kihuen of Las Vegas. Senate Majority Leader Steven Horsford of Las Vegas is also said to be interested in running for Congress.

N&V StaffOctober 3, 2021
Read More
Scroll for more
Tap
A Fly On The Wall
The Fox/Google Debate