Reid War Wagon Gets A Flat 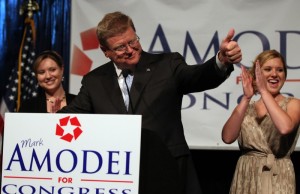 (Lori Piotrowski) – It’s official. Mark Amodei trounced Kate Marshall. The nebulous “they” said it couldn’t be done. And yet, Marshall couldn’t even win her home county.

On election eve, Senator Mike Roberson (R – SD5) was predicting an Amodei win. “He’ll carry it by 20 points,” he said.

Amodei won all 17 Nevada counties, and the tally in Clark, a typically Democratic stronghold, was especially telling: 3,499 to 2,180.

When Harry Reid was squiring Kate Marshall around Washington, D.C., several months ago, it’s likely he never envisioned that the trip would be a one-time event.

Republicans, on the other hand, learning that the Senate Majority Leader was taking a personal interest in the CD2 special election, put their feet to the ground, their fingers to the telephone, and turned out the vote.

Dave Gibbs, chairman of the Clark County Republican Party, thanked the volunteers who helped to ensure the vote for Amodei.

“My heartfelt thanks to Tim Williams, who worked tirelessly to manage the state and county effort, and to all those who knocked on doors, made thousands of phone calls, and did all the other things that happen to make a campaign successful. This is a great day for Nevada, the Nevada Republican Party, and the Clark County Republican Party.”

Senator Reid’s war wagon suffered some damage on Tuesday. See for yourself how poorly the Democrats believed in their candidate. Remember that the Democratic party chose this candidate over a field of 10, including Jill Derby, who many thought would have been an excellent choice.

Was this a bellwether for the 2012 election? Republicans believe it is.

Gibbs said, “Mark Amodei’s convincing win in Nevada shows how fed up Nevadans are with this President and his policies.  It also shows how motivated Nevadans are to send people to Washington who will actually solve our country’s economic problems rather than just give speeches about who is to blame.”

“The fact that Mark won Clark County by 22 percent when the Democrats have a four point registration advantage is a testament to how hard the Nevada Republican Party worked to ID voters and to get them out to vote in this race,” he continued. “We hope to use this victory as a building block to success in 2012.”

Speaking about Amodei’s victory from a state-wide perspective, Amy Tarkanian, chairwoman of the Nevada Republican Party, said, “With their support of Mark Amodei, the people of Nevada’s 2nd Congressional District have chosen the principles of common sense, Nevada values, and prosperity. Mark Amodei’s election is a resounding rejection of the Obama-Reid-Pelosi agenda and of bigger, more expansive and overreaching government.”

She concluded, “I know Mark will make an excellent Congressman and will serve his district well. I congratulate Mark on a fine campaign and look forward to working with him as the newest member of Nevada’s congressional delegation.”

Senator Elizabeth Halseth (R – SD9), agreed: “Mark Amodei will be a strong voice for Nevada. His leadership resulted in a successful campaign focused on the issues and getting people back to work in Nevada. His strong leadership qualities will make him an effective leader in the United States Congress.”

N&V StaffOctober 4, 2022
Read More
Scroll for more
Tap
Conservatism Gets A Makeover
Amodei Wins – What We Can Take Away