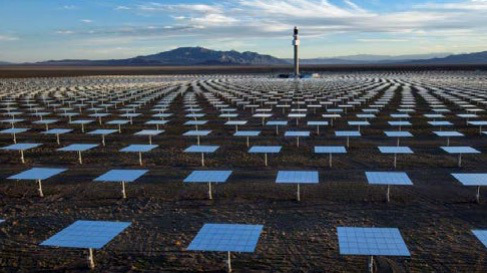 Reid claims that Nevada has 21,800 clean energy jobs as a result of $6 billion in “investments” in clean energy — more than a quarter of a million dollars per job, by the way. Those investments include millions in grants, loan guarantees and cheap federal public land, as well as a state law that mandates public utilities purchase wind, solar and geothermal power no matter what the cost.

As for those jobs, Reid’s report has a footnote showing the source for that figure comes from a January report by the Wind Energy Foundation, which has footnote linking to a Bureau of Labor Statistics website has stats for “Green Goods and Services” jobs in 2010. That Nevada jobs number is from 2011.

During a congressional committee hearing a congressman managed to get a BLS official to admit that green jobs include: Floor sweeper at a solar panel factory, professor teaching environmental studies, anyone who collects, reuses, remanufactures, recycles, or composts waste materials, an antique dealer, clerk at a bicycle repair shop, any bus driver, employee at a used record shop, railroad workers, and even oil lobbyists.

Reid specifically mentions the soon-to-be-operational Crescent Dunes thermal solar power plant near Tonopah, which got a $737 million federal loan guarantee. Reid neglected to mention the plant has a contract with NV Energy to sell its wholesale power at 13.5 cents per kilowatt-hour, though current residential retail power is 11.6 cents per kWh.

Reid singles out Spring Valley wind and mentions it has a capacity of 520 megawatts, without mentioning in has been producing at less than 20 percent of that capacity at a cost of nearly 10 cents per kWh.

Nor does he note that Silver State North Solar, which got a federal grant, is charging NV Energy 13.2 cents a kWh.

Editing of the report was a bit shoddy, too. At one point the report says the One Nevada transmission from Las Vegas to Ely “is estimated to become operational in 2013,”  but a couple of graphs later states the “project was energized in 2014.”

Obama will be the keynote speaker at Monday’s confab. Like Reid, he also tends to omit a few facts when he tries to foment fervor for green energy.