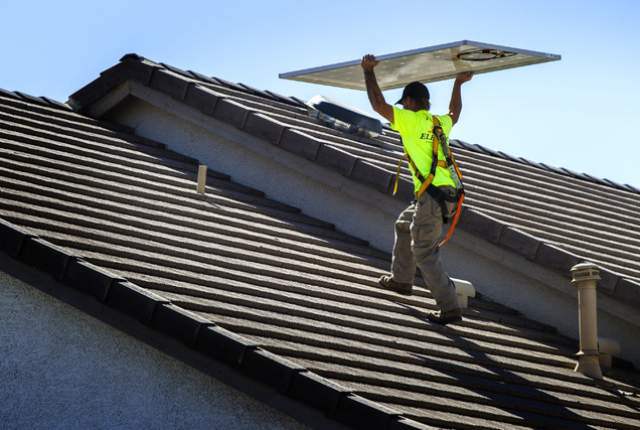 (Thomas Mitchell) – Have you ever watched pigs nudging each other out of the way attempting to see which one can get its snout deepest into the slop trough?

We are seeing a sort of pork scrum at the Legislature in Carson City between the state’s biggest monopoly electric utility and those who install rooftop solar panels that are only profitable due to ratepayer subsidies and tax breaks and government handouts.

The taxpayers get left holding the bag no matter who wins.

This past fall taxpayers shelled out $1.2 million to entice billionaire Elon Musk to open an office for his SolarCity company in Nevada. SolarCity is one of those firms that installs rooftop solar panels.

Residences and businesses that install solar panels contract with billionaire Warren Buffett’s NV Energy under a net metering program. Any excess power they generate goes onto the grid and each kilowatt-hour uploaded is deducted from that month’s bill at the retail rate. But because solar is intermittent and makes it more difficult to balance the grid, state law dictates the total amount of net metering cannot exceed 3 percent of the statewide peak load. That cap is expected to be reached this year, which would shut down any new rooftop installations.

There was a bill before the Legislature to raise the cap to 10 percent, but when NV Energy objected that provision went up in a puff of smoke.

NV Energy, which in the previous Legislature convinced lawmakers to require the closure of all its coal-fired plants and foist all of the cost for doing so and building new renewable and gas-fired generation onto ratepayers, doesn’t like paying retail for power.

After paying SolarCity to open here, will it have to close?

All of this was played out while Sen. Harry Reid, one of the champions of renewable energy and its subsidies, was telling a clean-energy luncheon crowd that renewable energy has been a boon to the state’s economy and jobs.

He claimed the industry has invested $6 billion in the state and created 20,000 jobs.

Of course, he did not bother to note that historically for every renewable energy job created two to four jobs are destroyed because of the high cost of renewable power. Also, every dollar “invested” in renewable energy, usually through tax breaks and subsidies and higher power prices, is a dollar not invested in some other industry.

He also took the time to lambaste the few newspaper editorialists and columnists in the state who dare to disdain his crony capitalism by writing “the most moronic editorials.”

Reid was one of the champions of the state requiring a certain percentage of its electricity come from renewables — 25 percent by 2025, which should cause power bills to increase 6 percent over the next decade. He also pushed Senate Bill 123 that shut down coal-fired power plants.

A recently released study by the Beacon Hill Institute at Suffolk University for the Nevada Policy Research Institute found SB123 will destroy 2,630 jobs by 2020 and real disposable income will decline by $226 million per year due to increased electricity cost. This pushes up prices across the grid, whether you are a customer of NV Energy or not.

If the pigs at the trough allegory doesn’t appeal to you, perhaps the Bootleggers and Baptists Theory will. This theory holds that moral opposites will combine forces to achieve an objective that serves both.

For example, Baptists demanded alcohol prohibition to protect drunkards from themselves, while bootleggers wanted prohibition to block competition and keep prices higher.

Now, one group claims to want clean air to save the planet, while the other doesn’t want to compete in the free market for capital and with competitive electrical rates.

NV Energy doesn’t mind building its own wind turbines and solar farms, because it gets a return on its equity of about 10 percent when it builds stuff. The company doesn’t like paying retail for subsidized/tax break-driven rooftop solar panels.

Somehow, the renewable backers never calculate the cost associated with intermittent renewables such as wind turbines and solar panels, which must be backed up kWh per kWh by the capital and operating cost of maintaining a fossil fuel-fired generator for when the wind dies down or a cloud passes overhead.

They get us to pay the bill, coming and going. At least we can enjoy watching them squabble.

The original version of this column was published at Mr. Mitchell’s blog.

N&V StaffOctober 4, 2022
Read More
Scroll for more
Tap
Fiore: If you can’t walk the talk, I will hold you accountable
Anatomy of an Uber-horrible Bill