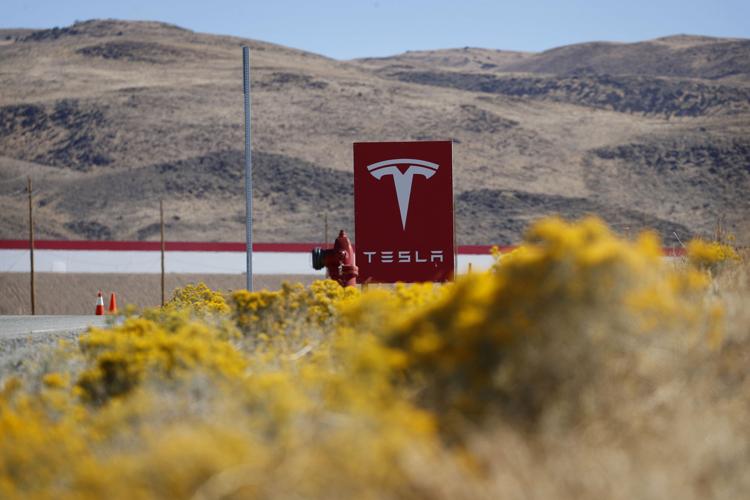 In this Oct. 13, 2018, photo, a sign marks the entrance to the Tesla Gigafactory in Sparks, Nev. A population inrush to Nevada has been driven by people seeking more affordable housing and a growing tech industry around Reno.
AP Photo/John Locher

(Alan Krawitz) – Nevada received average to poor marks on the overall health of its manufacturing industry, according to a recent report by researchers at Ball State University in Indiana.

The university’s Center for Economic and Business Research, which conducts economic policy research, analysis and forecasting, gave the state one “F,” two “D” grades, one “B” and five “C” scores in its 2019 Manufacturing Scorecard, which shows how each state ranks in several areas that are of special interest to site selection experts in the manufacturing and logistics industries.

Each category included several variables for each state that were aggregated and then ranked. Grades were assigned A through F using a bell curve.

The state scored a “D” in logistics industry health, which is made up of the capacity to move goods, store inventory and manage the distribution and processing of manufactured goods.

The scorecard noted that logistics firms use many of the same factors as manufacturing firms when deciding where to locate, but “there is a more complex interplay between local conditions and the existing or planned transportation networks of roads, railroads, waterways, and airports.”

The state also ranked a “D” in the human capital category as the report noted that “factories, rail yards, distribution facilities, and machine shops of today are highly technical and complex, and they are dependent on workers who can work successfully in this environment.”

Human capital was called “the most important factor in firm location decisions.”

The sole bright spot for Nevada was worker benefit costs, where the state was given a “B” grade.

The report measured benefit costs by using data on health care premiums, long-term health care costs, workers’ compensation costs per worker, and fringe benefits of all kinds as a share of worker costs.

However, not everyone in the state is sold on the report’s mostly poor marks.

“Nevada has had the fastest percentage growth in manufacturing jobs in the nation for the last three years,” said Ray Bacon, a spokesman with the Nevada Manufacturers Association. “The starting point was dismal, but the [Tesla] Gigafactory changed the perception of companies looking for a western location, but not CA because of its challenging laws, policies, taxes and cost.”

The Tesla Gigafactory, scheduled to be completed in 2020, will help produce lithium-ion batteries and serve as an electric vehicle subassembly factory near Reno, Nevada.

Bacon said that most of the workers for the gigafactory will ultimately be Nevada residents as part of the original deal Tesla made with the state.

Commenting on the report specifically, Bacon was a bit skeptical.

He said that without having the proper time to study all their sources, the report “looks a bit suspect.”

Bacon noted that at the Tahoe Reno Industrial Center there are companies — one million square feet in size — which from ground breaking to occupancy were built in six months.

“I challenge you to find any other place in this country where that happens, even rarely.”

He added that in addition data centers for Switch, Apple and Google are under construction as well as several others.

“They chose to be here for a reason, ask them why.”

“Nevada is home to one of the strongest and fastest growing economies in the country,” Paul said.

He added that the state has always been business friendly and finds itself on the cutting edge of autonomous systems, workforce development and advanced manufacturing along with legacy industries such as mining, agriculture, tourism and gaming.

“Our state is perfectly located to be the gateway to the Western United States with access to large markets thus we have seen a number of large distribution operations move to Nevada,” he said. “In fact, if you drank a cup of Starbucks coffee in any of the western states, the beans were likely roasted and shipped from Minden, Nevada.”

By Alan Krawitz | The Center Square