(Rick Manning, NetRightDaily.com) – And they’re off. 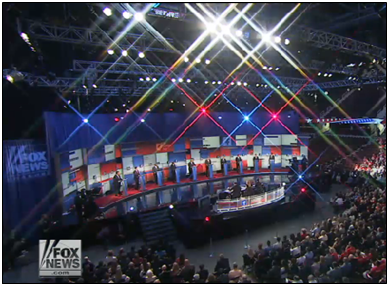 The Republican presidential campaign is off and running with the first of many presidential debates. A debate that drew much more attention than a political event 15 months prior to a general election normally would draw due to Donald Trump’s energy and emergence onto the political scene.

Unsurprisingly in retrospect, the debate format of short answers kept it lively, but hindered Trump’s ability to use his charismatic advantage to win voters and get into details on his positions. Other practiced debaters, politicians and prosecutors thrived in the familiar format, and later in the debate, The Donald adjusted using his natural charm to his advantage.

Viewers anxious to learn about how candidates stood on a variety of issues got an earful of conservative rhetoric and their relative performance. But Republican and Independent voters have heard the promises before. They have heard the lofty speeches and the ads promising a repeal of Obamacare or ending executive amnesty and have endured the disappointment when those same leaders walked away from their promises immediately upon election.

In 2016, Republican voters are tired of promises and are looking for someone who actually means it, a leader who has a proven record of fighting for their priorities.

The failure of Mitt Romney and John McCain before him, who were each sold as the candidate who could win by the political donor and pundit class, has left a bad taste in GOP voters’ mouths. There is a sense that they traded their vote for “winnability” and ended up with a candidate who refused to fight for conservative issues and, as a result, lost to a president who has taken a wrecking ball to the country.

Senator Marco Rubio is one candidate who will likely fall prey to this phenomenon. Attractive and well scripted, he hits resonant chords when he talks about his upbringing and vision for America. Unfortunately for him, his record in the Senate, including his unwillingness to stand and fight on big issues, will submarine him when compared with Senator Cruz or Paul.

Of the governors, Jeb Bush is the most likely victim of this rebellion against the establishment.  But the really bad news for Bush in the debate was the strong performance by both New Jersey’s Chris Christie, who used his prosecutor background to perfection, and Ohio’s John Kasich, who was bolstered by his home state crowd. In a perfect Bush world, Christie and Kasich need to go away – because they draw votes from him – so he can establish himself as the inevitable nominee. If anything, Thursday’s first debate just might result in the New Jersey and Ohio governors moving up in the polls at Bush’s expense.

Senator Ted Cruz proved himself to be a man in command of the issues, who never backed down. Most importantly for Cruz, he looked and sounded presidential emerging from the caricature the media has drawn of him. Should Trump’s support falter, it is Cruz who likely will be the primary beneficiary, as he is unabashedly going after voters who are disenchanted with the GOP mainstream.

Beyond Trump, the candidate who I wanted to see and hear more from was Wisconsin Governor Scott Walker. Unfortunately in the first two-thirds of the debate, Walker was listless by comparison to his colleagues and gave short, concise, forgettable answers to the questions he was posed.

The soft-spoken Dr. Ben Carson started tentatively in this difficult set-up, but later rebounded with his final two answers which provided a strong glimpse of his intellect and appeal.

Of those not afforded a place on the big stage, businesswoman Carly Fiorina was the winner as she was featured from the earlier afternoon debate of the final seven challengers in a very positive light in the prime time show without having any of her negatives exposed through direct questioning. The media buzz around her performance is likely to lift her in the polls.

However, that might not be enough because the next debate, sponsored by CNN, puts Fiorina, Louisiana Governor Bobby Jindal and former Texas Governor Rick Perry at a distinct disadvantage. Under CNN’s rules, no matter how much a candidate rises in upcoming polls, late-blooming candidates will be dragged down by the debate selection rules which give early polls a much greater weight holding low early name identification against a candidate.

In the end, the big winner was the GOP, and the loser was the Democratic National Committee. The eyeballs Donald Trump brought to the television set showed those watching a diverse set of smart candidates in the GOP field discussing and clashing over the issues facing our nation.   The DNC, on the other hand, is desperately attempting to help Hillary Clinton escape the rigors of a primary campaign by failing to even schedule their kick off debate until October.

I doubt that anyone will look back on Aug. 6, 2015 as the turning point in the presidential election, but the debate itself certainly lived up to the promise making the next one must-see TV.